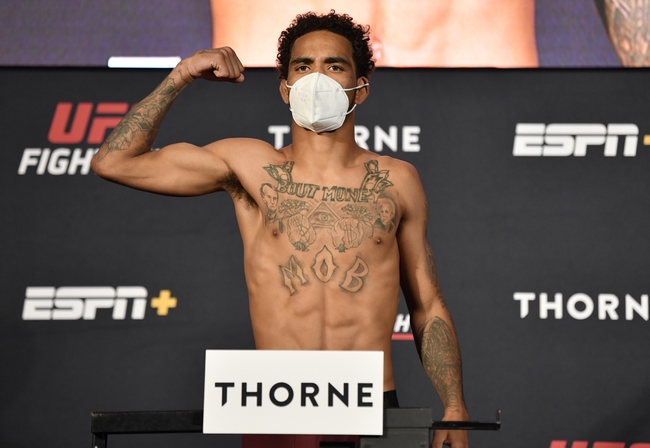 Jim Miller enters this fight with a 31-14 record and has won 55 percent of his fights by submission. Miller has lost six of his last nine fights and is coming off a February loss to Scott Holtzman. Miller is averaging 2.83 significant strikes per minute with an accuracy percentage of 40 percent. Miller is averaging 1.69 takedowns with an accuracy percentage of 41 percent. Miller is coming off a losing effort, but the fight earned fight of the night honors at UFC Fight Night 167, a bout where 186 total strikes were landed. Given his losing stretch and the fact he’ll be 37 years old soon, it’s important for Miller to secure a much needed victory. Miller is most known for his cardio and wrestling, as he simply wears on his opponent and does most of his damage on the ground. Out of 31 career wins for Miller, 27 of them have come by either submission or decision, and he’s only been submitted three times in his career. Miller is simply at his best when in the clinch or on the ground. This will be Miller’s ninth career fight in Las Vegas.

Roosevelt Roberts enters this fight with a 10-1 record and has won 50 percent of his fights by submission. Roberts’ has won five of his last six fights and is coming off a May win over Brok Weaver. Roberts is averaging 3.12 significant strikes per minute with an accuracy percentage of 49 percent. Roberts is averaging 1.83 takedowns with an accuracy percentage of 57 percent. Roberts fought a couple of weeks ago and beat a fighter who missed weight in the second round with a rear-naked choke. While the fight wasn’t demanding and didn’t even complete two rounds, it’s going to be interesting to see how Roberts handles fighting twice in less than a month. Roberts is an exciting fighter who has done well in a handful of UFC bouts, and he’s highly efficient with his takedowns and ground and pound. Roberts always seems to gain top position and has been a bear up to this point, not allowing his opponent to get up and either destroying them with heavy strikes or finding a submission hold. Roberts is always looking for a chance to finish a fight, so don’t let the recent decisions fool you. A brown belt in BJJ and solid scrambling skills, Roberts is somebody to watch very closely in this division. This will be Roberts’ fourth career fight in Las Vegas.

On paper Miller is a live dog because of his experience, his ground game and the fact he’s fighting somebody who just fought a couple weeks ago. Due to the pandemic and gyms not being 100 percent open, it’s tough for fighters to properly prepare for a single fight let alone two. With that said, I’m still signing with Roberts to win this fight. As I said before, Roberts is a name to watch closely in this division with an above average ground game and some underrated pop in his strikes. Roberts has the tools to really turn some heads in the UFC and we’re starting to see it.