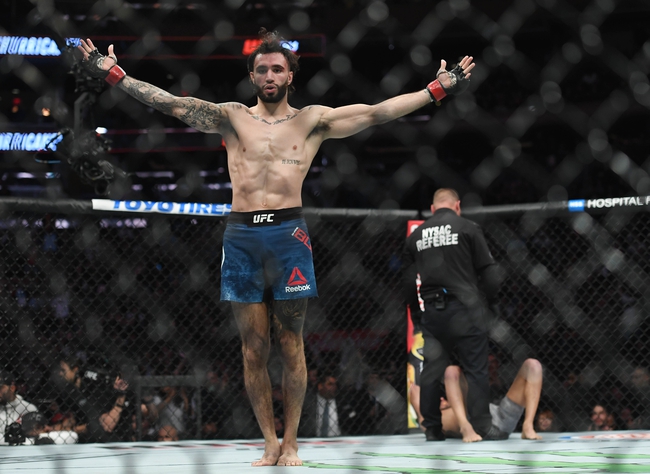 Josh Emmett enters this fight with a 15-2 record and has won 47 percent of his fights by decision. Emmett has won six of his last eight fights and is coming off a July win over Mirsad Bektic. Emmett is averaging 3.63 significant strikes per minute with an accuracy percentage of 36 percent. Emmett is averaging 1.50 takedowns with an accuracy percentage of 45 percent. Emmett is coming off a knockout victory at UFC Fight Night 155 that earned performance of the night. Each of Emmett’s last three wins have come by knockout. Emmett usually features a lot of grappling and wrestling in his attack due to his background, but now we’re seeing him more comfortable striking and displaying more of that power. Emmett is one of the more well conditioned fighters in the featherweight division and it’s helped him win seven of his eight career decisions. This will be Emmett’s first career fight in Las Vegas.

Shane Burgos enters this fight with a 13-1 record and has won 38 percent of his fights by submission. Burgos has won five of his last six fights and is coming off a November win over Makwan Amirkhani. Burgos is averaging 7.09 significant strikes per minute with an accuracy percentage of 50 percent. Burgos is averaging 0.36 takedowns with an accuracy percentage of 100 percent. Burgos is coming off a dominating showing at UFC 244 that he finished in the third round after landing 161 total strikes. Burgos has now won each of his last three fights and is 6-1 under the UFC banner. Burgos is a clean standup striker with a background in boxing, as he gets in and out with ease, has great head movement and puts together combinations well. Burgos works the body a lot and can push the pace at any moment. Burgos uses his knees effectively in the clinch and has above-average wrestling for somebody who seems most comfortable standing up. Burgos aloha above-average toughness to stand up and fight his style while taking some powerful counters on the other side. This will be Burgos’ first career fight in Las Vegas.

This should be a fun fight between two guys who will probably get the style of fight they want, especially with Emmett showing his powerful striking surge as of late. If that’s the case, Burgos should be able to get the job done, as he’s a highly skilled boxer, has a five-inch reach advantage and will push the pace against the older opponent. Burgos also defends takedowns well and has a submission game as well for somebody known as a stand up striker.

Burgos and the cheap price feels like one of the better bets on this card.