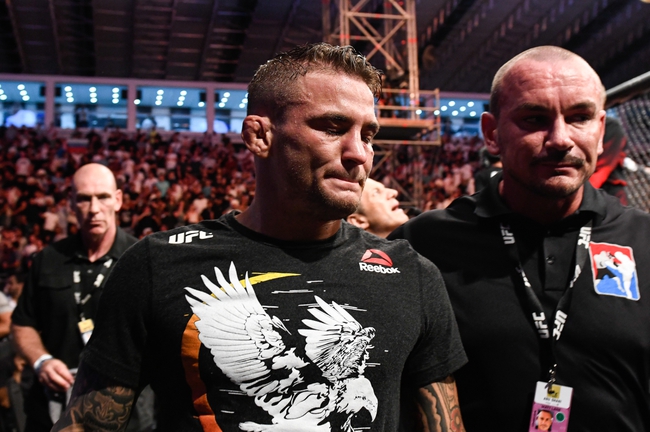 Dustin Poirier and Dan Hooker fight Saturday during UFC on ESPN 12 at the UFC APEX.

Dustin Poirier enters this fight with a 25-6 record and has won 48 percent of his fights by knockout. Poirier has won five of his last seven fights and is coming off a September loss to Khabib Nurmagomedov. Poirier is averaging 5.51 significant strikes per minute with an accuracy percentage of 49 percent. Poirier is averaging 1.55 takedowns with an accuracy percentage of 37 percent. Poirier was submitted in the third round of UFC 242, a fight where he landed some solid strikes but couldn’t prevent the takedowns and was controlled on the canvas. The loss snapped four-fight winning streak for Poirier, and he now hopes to avoid back-to-back losses for the first time in his career. Poirier has built himself up to one of the top strikers in this division, as he lands some violent hooks with one-punch knockout potential and has the occasional leg kick that can do it’s fair share of damage, just ask Yancy Medeiros. Poirier is extremely polished on the feet with a boxing background and a tricky southpaw stance. Poirier is also a black belt in BJJ, and while he’s not exactly quick to tap into his wrestling bag, he does some impressive work on the ground and has seven career submission victories. Poirier has finished four fights via an armbar, and he’s only been submitted twice in his career. This will be Poirier’s ninth career fight in Las Vegas.

Dan Hooker enters this fight with a 20-8 record and has won 50 percent of his fights by knockout. Hooker has won seven of his last eight fights and is coming off a February win over Paul Felder. Hooker is averaging 4.70 significant strikes per minute with an accuracy percentage of 45 percent. Hooker is averaging 0.43 takedowns with an accuracy percentage of 28 percent. Hooker is coming off a split decision victory at UFC Fight Night 168 that earned fight of the night honors. Hooker landed 133 total strikes and 55 percent of his significant strikes, and he had one successful takedown. Two of Hooker’s three decision victories have come in his last two fights. Hooker has become one of the more exciting fighters due to the way the bouts end, and he’s one of the best volume strikers in the lightweight division overall. Hooker is most successful on his feet and his length can be very tough for opponents. With a kickboxing background, it’s no secret where Hooker is most comfortable, but he also has seven submission wins to his name and is slippery in the clinch, so he’s far from a one-trick pony and can more than hold his own on the canvas. Hooker has three career wins via the guillotine choke. This will be Hooker’s third career fight in Las Vegas.

Hooker is a tough dude with length, he throws powerful leg kicks and he can hold his own on the ground if this fight goes there. This could be a a blood bath on the feet and that’s where you want the plus money. We also cant overlook Poirier just losing a shot at the belt, so we have to question where he is mentally. With all that said and a case to be made for the plus money, I’m siding with Poirier, the guy who has cleaner boxing, better power and would have the advantage on the ground given his black belt in BJJ. This is also a smaller cage, so Poirier should be able to line up his shots easier and land something powerful.

Give me Poirier by knockout.