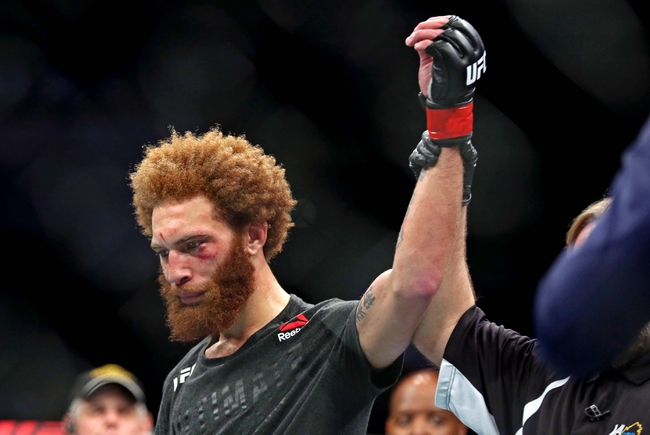 Luis Pena and Khama Worthy fight Saturday during UFC on ESPN 12 at the UFC APEX.

Luis Pena enters this fight with a 8-2 record and has won 50 percent of his fights by submission. Pena has won four of his last six fights and is coming off a February win over Steve Garcia. Pena is averaging 3.32 significant strikes per minute with an accuracy percentage of 46 percent. Pena is averaging one takedown with an accuracy percentage of 29 percent. Pena is coming off a victory at UFC Fight Night 169 where he was the more accurate striker and landed the bigger shots. Pena will be fighting for the fourth time since June of last year and has a chance to make some noise in this division with a little win streak. Pena stated his career as a wrestler and has four submission victories, so his ground game goes without saying. However, Pena is a a terrific athlete and highly skilled on the feet as well, as he throws heavy punches and loves to mix in the knees whether he’s in the clinch and flying toward his opponent. Pena has a high fight IQ and can be a bit unpredictable in his attack, but there’s no doubt he has the goods to push this weight class. This will be Pena’s second career fight in Las Vegas.

Khama Worthy enters this fight with a 15-6 record and has won 60 percent of his fights by knockout. Worthy has won each of his last six fights and is coming off an August win over Devonte Smith. Worthy is averaging 4.94 significant strikes per minute with an accuracy percentage of 41 percent. Worthy is averaging zero takedowns with an accuracy percentage of zero percent. Worthy won his UFC debut at UFC 241 with a first round knockout and one of the biggest upsets in MMA history. Worthy at one point was a +755 underdog and closed near the +500 range. Worthy has now won each of his last six fights and hasn’t lost since his 2017 bout against Kyle Nelson. Worthy showed his power in his striking, and he’s now knocked out his last two opponents. Worthy is most comfortable on his feet where he can let his hands go and push the pace, but he’s also been knocked out in five of his six losses, so his aggressiveness and questionable defense can cost him as well. Worthy has enough good takedown defense to get by, but he’ll have to become more comfortable on the canvas if he’s ever going to make a dent in this division.

After seeing what Worthy did in his UFC opener, you have no choice but to give these odds a look. Worthy has power and has the confidence knowing he’s riding a six-fight winning streak. With all that said, Pena is somebody who could eventually get a title shot and is the more balanced fighter in this spot. Pena is smarter with his striking and throws heavy knees in the clinch. Pena is also a quality wrestler, and he’d cause Worthy all sorts of issues with his length and athleticism.

This is a fight Pena should control from start to finish. I’ll gladly lay this price.