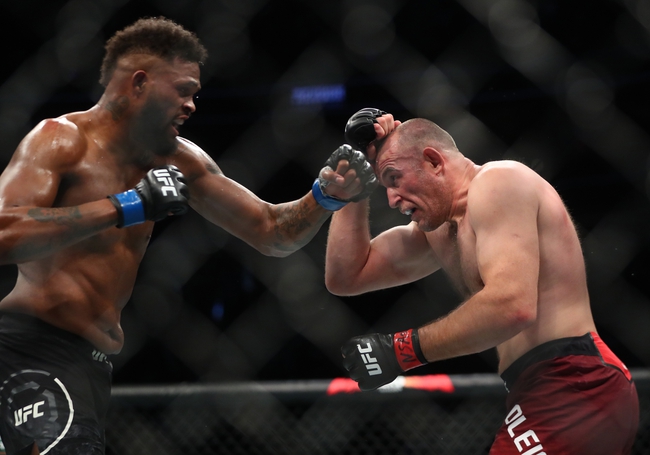 Gian Villante and Maurice Greene and fight Saturday during UFC on ESPN 12 at the UFC APEX.

Gian Villante enters this fight with a 17-11 record and has won 59 percent of his fights by knockout. Villante has lost six of his last 10 fights and is coming off a February (2019) loss to Michał Oleksiejczuk. Villante is averaging 4.26 significant strikes per minute with an accuracy percentage of 42 percent. Villante is averaging 0.53 takedowns with an accuracy percentage of 23 percent. Villante is coming off a rough loss at UFC Fight Night 145 where he ate a body shot in the first round and was finished. It was Villante’s fifth career knockout loss, and he hopes to avoid back-to-back losses for the third time in his career. Villante is a volume striker who looks to stay busy and is most effective on his feet due to his kickboxing background and knockout power. Villante has won 10 of his 17 fights by knockout, so it’s clear the style of fight he wants, but he also has a wrestling background at Hofstra and played football there as well. Villante is a gat athlete at almost 35 years old, and he’s never been finished on the canvas despite 11 career losses. This will be Villante’s fifth career fight in Las Vegas.

Maurice Greene enters this fight with a 8-4 record and has won 50 percent of his fights by submission. Greene has split his last six fights and is coming off a January loss to Aleksei Oleinik. Greene is averaging 4.19 significant strikes per minute with an accuracy percentage of 44 percent. Greene is averaging zero takedowns with an accuracy percentage of zero percent. Greene is coming off a second round submission loss at UFC 246 and he’s lost back-to-back fights that puts him at 3-2 under the UFC banner. At almost 34 years old, Greene can’t afford to let these losses pile up if he’s going to make a dent in this division. Greene is a massive heavyweight at 6’7” with an 82-inch reach, and he has clear knockout power despite not being the most accurate striker in the world. Greene is also effective in the clinch and will throw hard knees to the body. Greene has a blue belt in BJJ and all four of his submission victories have come via the triangle choke. This will be Greene’s third career fight in Las Vegas.

Villante is probably the more balanced fighter in this matchup when you throw in his wrestling and that’s worthy of considering him in the underdog role. However, Greene has a massive size advantage in this fight and has the power that’s certainly going to test Villante based on what we saw in his last bout. Villante has had issues putting guys away the last few years, and he’s now starting to show a questionable chin that will be tested here.

I like Greene to end the losing skid and get back on track with a victory.