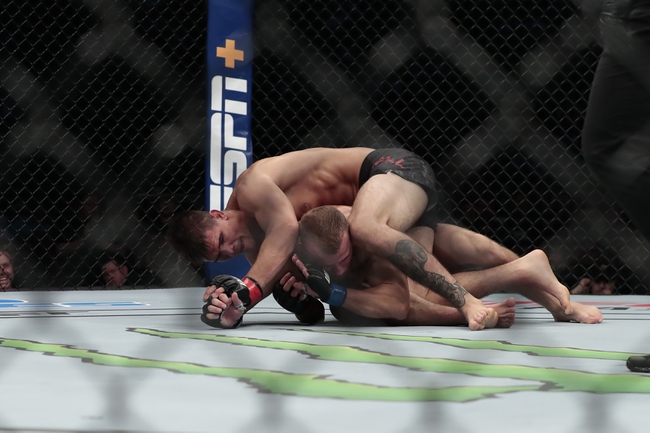 Mike Perry and Mickey Gall fight Saturday during UFC on ESPN 12 at the UFC APEX.

Mike Perry enters this fight with a 13-6 record and has won 85 percent of his fights by knockout. Perry has lost five of his last seven fights and is coming off a December loss to Geoff Neal. Perry is averaging 4.27 significant strikes per minute with an accuracy percentage of 47 percent. Perry is averaging 0.61 takedowns with an accuracy percentage of 41 percent. Perry is coming off a first round knockout loss at UFC 245, the first time he’s ever been knocked out. Perry is now on a shaky losing stretch and hopes to avoid three straight losses for the first time in his career. Perry is a pure striker with heavy hands and a deep boxing background that’s allowed him to win 11 of his 13 fights by knockout, a few that have ended with just one shot. Each of  Perry’s first 11 victories came by knockout, as he throws crisp combinations, gets in and out nicely and will mix in a knee in the clinch every now and then. Perry is a purple belt in BJJ, so he has some ground game experience, but everybody knows how he butters his bread and the style of fight he wants. This will be Perry’s fourth career fight in Las Vegas.

Mickey Gall enters this fight with a 6-2 record and has won 83 percent of his fights by submission. Gall split his last four fights and is coming off an August win over Salim Touahri. Gall is averaging 2.22 significant strikes per minute with an accuracy percentage of 43 percent. Gall is averaging 1.50 takedowns with an accuracy percentage of 38 percent. Gall is coming off a decision victory at UFC on ESPN 5 where he landed 66 total strikes and produced one takedown. Gall now looks to win back-to-back fights for the first time since 2016. Gall is one of the more balanced fighters in this division due to his boxing, BJJ and wrestling background, as he’s comfortable everywhere and has had a decent career for such a small sample size of fights. Gall is most known for his ground game, as he has a back belt in BJJ and all five of his submission victories have come by the rear-naked choke. Gall is a nightmare for opponents once he gets the back, but he also has decent enough striking and enough pop in his right hand to drop his opponent. This will be Gall’s third career fight in Las Vegas.

You could argue that Perry is the better fighter based on his experience and the power in his hands with the ability to end things at any moment. However, these prices are a bit insane given Perry’s struggles as of late. I’m not laying almost -300 odds with a guy who has lost five of his last seven fights. Gall would have a clear edge on the ground if that’s where the fight ends up, and he has a odd style standing up along with a three inch reach advantage, so don’t count him out on the feet either. These odds are a bit confusing if we’re being honest.

Give me Gall and the big plus money.