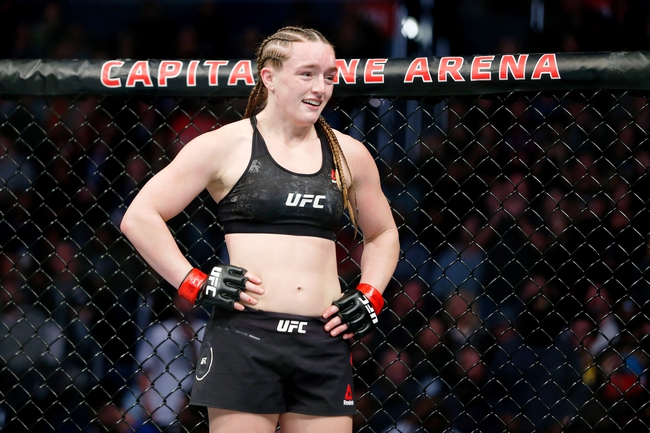 Aspen Ladd and Sara McMann fight Saturday during UFC on ESPN 12 at the UFC APEX.

Aspen Ladd enters this fight with a 9-1 record and has won 67 percent of her fights by knockout. Ladd has won five of her last six fights and is coming off a December win over Yana Kunitskaya. Ladd is averaging 5.22 significant strikes per minute with an accuracy percentage of 55 percent. Ladd is averaging 2.45 takedowns with an accuracy percentage of 75 percent. Ladd is coming off a third round knockout at UFC on ESPN 7 where she landed 85 total strikes and produced two takedowns. Ladd is now 4-1 under the UFC banner and is 17-2 for her career when you throw in her amateur record. Ladd comes from a kickboxing and boxing background, and she has some wrestling experience as well as a purple belt in BJJ. Ladd has been a takedown machine at the UFC level and has shown great grappling and wrestling abilities to gain position on the canvas. Ladd wants to close the distance as quick as possible to get the fight off the feet, and she has serious ground and pound once she gets on top. If Ladd ever becomes more confident fighting standing up, she’s a legit title contender in this division. This will be Ladd’s third career fight in Las Vegas.

Sara McMann enters this fight with a 12-5 record and has won 50 percent of her fights by decision. McMann has split her last 10 fights and is coming off a January win over Lina Lansberg. McMann is averaging 2.39 significant strikes per minute with an accuracy percentage of 46 percent. McMann is averaging 4.51 takedowns with an accuracy percentage of 63 percent. McMann is coming off a comfortable one-sided victory at UFC Fight Night 166 where she landed 62 total strikes and produced three takedowns. The win snapped a two-fight losing streak and shows there’s still something left in that tank as she approaches 40 years old. There’s no surprises with McMann, as she comes from a deep wrestling background that includes a silver medal in the 2004 olympics, countless medals in other competitions and success in submission grappling. McMann looks for any chance possible to get a fight on the ground and she usually controls the fight from there with ground and pound or just controlling top position. Few have the wrestling credentials McMann has, but each of her last three losses have come by submission. This will be McMann’s fifth career fight in Las Vegas.

This is going to be an interesting fight between two fighters with similar styles and the outcome could be decided on who is successful with the takedowns and is able to gain top position. The difference for me is that Ladd is a lot more aggressive in the octagon, and she looks to finish fights, especially with her ground and pound, and she has a little mean streak to her game. McMann can be a little passive at times and has had issues in the past putting fighters away. Ladd also has a clear edge standing up and is far more accurate with her strikes.

I trust Ladd to be the aggressor in this fight, so I’ll lay the reasonable price.