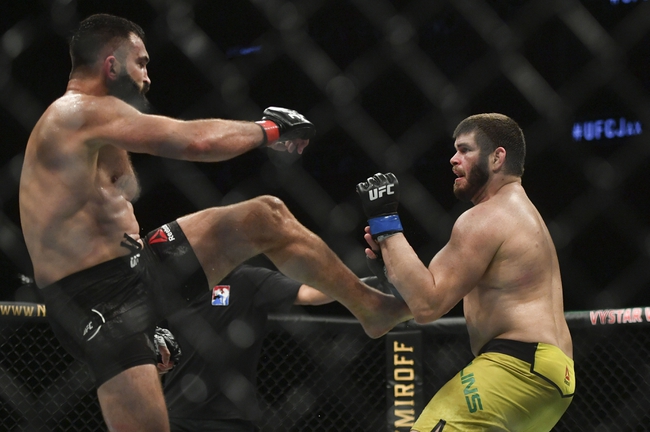 Philipe Lins and Tanner Boser fight Saturday during UFC on ESPN 12 at the UFC APEX.

Philipe Lins enters this fight with a 14-4 record and has won 57 percent of his fights by knockout. Lins has won five of his last eight fights and is coming off a May loss against Andrei Arlovski. Lins is averaging 2.73 significant strikes per minute with an accuracy percentage of 41 percent. Lins is averaging zero takedowns with a accuracy percentage of zero percent. Lins lost his UFC debut, as his opponent landed more strikes at a higher percentage. Lins now hopes to avoid back-to-back losses for the second time in his career and will be fighting for the second time in about five weeks. Lins is an explosive striker who has a good jab and mixes in strong leg kicks, and he has eight career knockouts on his resume. Lins is also a black belt in BJJ and is good at fighting from his back once on the canvas. Lins is a solid defender and hasn’t taken a ton of damage throughout his career, so he has a fighting chance entering this division. The one obvious concern is that Lins is taking on a heavy workload during a pandemic when it’s hard for fighters to properly prepare for one fight. This will be Lins’ first career fight in Las Vegas.

Tanner Boser enters this fight with a 17-6 record and has won 47 percent of his fights by knockout. Boser has won five of his last eight fights and is coming off a December loss to Ciryl Gane. Boser is averaging 4.17 significant strikes per minute with an accuracy percentage of 49 percent. Boser is averaging zero takedowns with a accuracy percentage of zero percent. Boser drops to 1-1 under the UFC banner, as he’s coming off a loss where his opponent landed 33 more strikes and was far more accurate. Six of Boser’s last seven fights have ended in decisions, and he hopes to avoid back-to-back losses for the second time in his career. Boser is a unique heavyweight, as he doesn’t have overwhelming knockout power, but his cardio and his leg kicks are high quality and the two things that help him produce victories. Boser has seen 12 of his fights go the distance and his bouts can be tough to judge at times due to a lack of aggressiveness on his side. Boser has decent takedown defense and is usually comfortable when he can keep a fight on the feet.

Lins is in a dangerous spot, as he’s fighting for the second time in nearly a month after just fighting three rounds, so I question how prepared he’s going to be. On the other side, Boser isn’t a fighter I’m all that high on because he’s a heavyweight who lacks finishing power, putting him at a serious disadvantage. Lins is the better fighter at this stage and has a three-inch reach advantage which can be key if this fight is on the feet.

I’ll side with Lins to redeem himself for the cheap price.