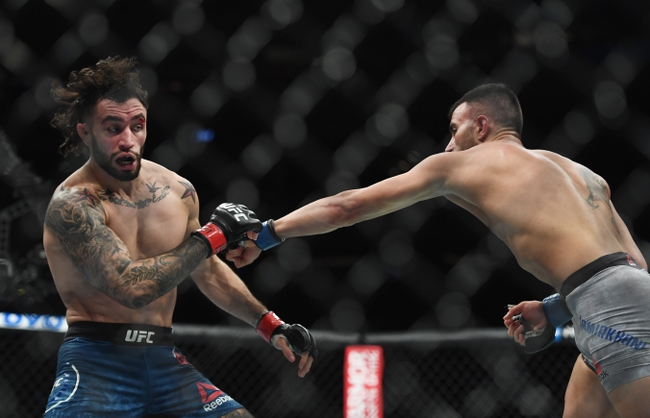 Makwan Amirkhani enters this fight with a 15-4 record and has won 67 percent of his fights by submission. Amirkhani has won six of his last eight fights and is coming off a November loss to Shane Burgos. Amirkhani is averaging 1.60 significant strikes per minute with an accuracy percentage of 47 percent. Amirkhani is averaging 3.39 takedowns with an accuracy percentage of 34 percent. Amirkhani is coming off a third round knockout loss at UFC 244, a fight he was getting dominated in from the start. Amirkhani now hopes to avoid back-to-back losses for the first time in his career. You know what you’re getting with Amirkhani, as he comes from a deep wrestling background and has been highly effective with his takedowns at the UFC level. Amirkhani wants a fight on the canvas where he can gain position and eventually find a submission hold, as 10 of his 15 wins have ended via submission. However, Amirkhani also has some amateur boxing experience, so he can hold his own on his feet if needed, but he’s far and away more comfortable on the ground. This will be Amirkhani’s first career fight in Abu Dhabi.

Danny Henry enters this fight with a 12-3 record and has won 42 percent of his fights by submission. Henry has won nine of his last 11 fights and is coming off a March (2019) loss to Dan Ige. Henry is averaging 5.85 significant strikes per minute with an accuracy percentage of 53 percent. Henry is averaging 0.89 takedowns with an accuracy percentage of 33 percent. Henry saw his five-fight winning streak come to an end at UFC Fight Night 147 in a first round submission loss, the first time he was finished in his career. Henry hopes to avoid back-to-back losses for the first time in his career. Henry is a highly balanced fighter who has knockout power in his hands, solid boxing skills and an impressive grappling game with submission ability. Henry can knockout his opponent standing up, deliver high level ground and pound or scramble his way into a submission victory. At almost 32 years old, Henry has the ability to make some noise in this division and it all starts with a victory here. This will be Henry’s first career fight in Abu Dhabi.

Amirkhani should be the favorite based on his experience and his high level wrestling. Henry is still a bit of an unknown when it comes to fighting above-average fighters and he’s coming off a loss. With that said, Henry’s grappling skills is good enough for him to hang in this fight, and he has a clear edge standing up. I’m really high on Henry’s ability and getting him as an underdog in this spot is tough for me to turn down.

Give me Henry and the plus money.