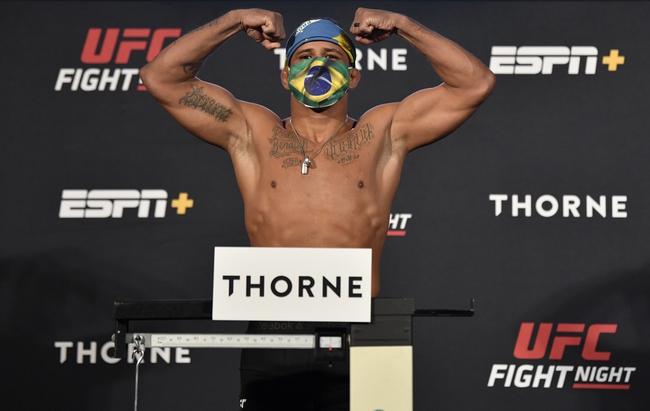 Kamaru Usman enters this fight with a 16-1 record and has won 50 percent of his fights by decision. Usman has won his last 15 fights and is coming off a December win over Colby Covington. Usman is averaging 4.60 significant strikes per minute with an accuracy percentage of 52 percent. Usman is averaging 3.44 takedowns with an accuracy percentage of 50 percent. Usman is coming off a highly impressive performance at UFC 245 that earned fight of the night honors. Usman showed he’s more than a grappler and wrestler, as he landed 175 total strikes and banged with a highly skilled stand up striker with power. So much for Usman being the boring fighter many consider him due to his usual takedown approach. Still, Usman is a takedown machine with a deep wrestling background, a black belt in BJJ and a quality ground and pound attack. Usman is a really gifted athlete who usually gets the fight where he wants it and can spend majority of the fight from the top position where he simply wears on his opponents and controls the fight from start to finish. It may not always be sexy for the viewing audience, but there’s no denying Usman is in control when he’s in the octagon. This will be Usman’s first career fight in Abu Dhabi.

Gilbert Burns enters this fight with a 19-3 record and has won 42 percent of his fights by submission. Burns has won each his last six fights and is coming off a May win over Tyron Woodley. Burns is averaging 3.15 significant strikes per minute with an accuracy percentage of 46 percent. Burns is averaging 2.21 takedowns with an accuracy percentage of 37 percent. Burns is coming off a dominating showing where he landed 156 total strikes and produced two takedowns. Burns has earned performance of the night honors in back-to-back fights and has now won each of his last four decisions. Burns has a decorated grappling background with plenty of experience in wrestling, and he’s a second degree black belt in BJJ. Burns is quick to find a submission hold once he gets the bout to the canvas and few have his grappling credentials, but he’s also decent on his feet with some pop in his hands and a come forward style. Burns doesn’t look as uncomfortable standing up as many guys with his background do, and he has six knockout wins on his resume. A balanced fighter, Burns has really turned some heads his last two fights. This will be Burns’ first career fight in Abu Dhabi.

Usman should be the solid favorite given what he’s done over the years, the rest he’s had and the fact he has a five inch reach advantage in this fight. There’s also the fact Burns is fighting for the second time in less than two months during a pandemic when it’s hard for guys to properly train for one fight. You also have to question if Burns is biting off a little more than he can chew taking his title shot so quickly. The line makes sense. With all that said, I’m still siding with Burns for the upset. Burns has the grappling skills to hold his own on the ground and not allow Usman to keep him on the canvas round after round. Burns also has the power advantage and if he lands some of the shots that Covington was able to land, he may drop Usman. Burns is too balanced of a fighter and is on such a roll that it’s hard to turn down this big plus money price.

Give me the upset.