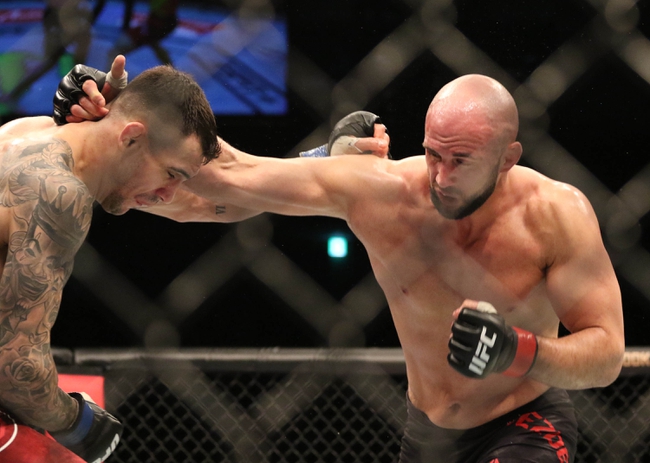 Volkan Oezdemir enters this fight with a 17-4 record and has won 71 percent of his fights by knockout. Oezdemir has split his last six fights and is coming off a December win over Aleksandar Rakic. Oezdemir is averaging 4.88 significant strikes per minute with an accuracy percentage of 45 percent. Oezdemir is averaging 0.57 takedowns with an accuracy percentage of 22 percent. Oezdemir is coming off a tight split decision where his opponent was more accurate with his strikes, but he landed 118 total strikes. Oezdemir has now seen two of his last three fights end in split decisions, and he looks for three straight victories for the first time since 2017. Oezdemir is a power striker with clear knockout power and a deep kickboxing background, and he has a history of being a quick worker where 11 of his last 14 victories have been decided in the first round. Oezdemir is a standup striker at heat given his kickboxing background, and he also defends takedowns at a high level. Oezdemir has an underrated ground and pound and has good toughness when you consider most of his fights are standup brawls where he’s also eaten some strong shots from his opponent and has only been knocked out once. This will be Oezdemir’s first career fight in Abu Dhabi.

Jiri Prochazka enters this fight with a 26-3-1 record and has won 88 percent of his fights by knockout. Prochazka has won each of his last 10 fights and is coming off a December win over C.B. Dollaway. Prochazka hasn’t lost a fight since December of 2018 and is riding a streak of eight straight knockout victories. This will be Prochazka’s UFC debut as he comes over from the Rizin Fighting Federation in Japan. Prochazka is a lengthy fighter at 6’4” with ridiculous power in his hands and an aggressive style where he stands in the pocket and throws until something lands. Prochazka seems to always be busy in the octagon and will throw in a flying knee every once in a while. Prochazka has decent takedown defense and has an effective ground and pound if it does end up on the canvas. Prochazka has also shown great toughness, as he’s been dropped before and quickly gets up and keeps fighting like nothing happened.

Oezdemir should be the favorite here because he’s the more experienced against better competition and he’s found his form over the last year. With that said, Prochazka is a quality fighter who has been hyped up in hopes of coming to the UFC, and he has a style and work rate that’s tough to match. Prochazka is going to trade bombs and doesn’t need much to get the fight in his favor. We’re getting a knockout artist at plus money. I’ll take it.