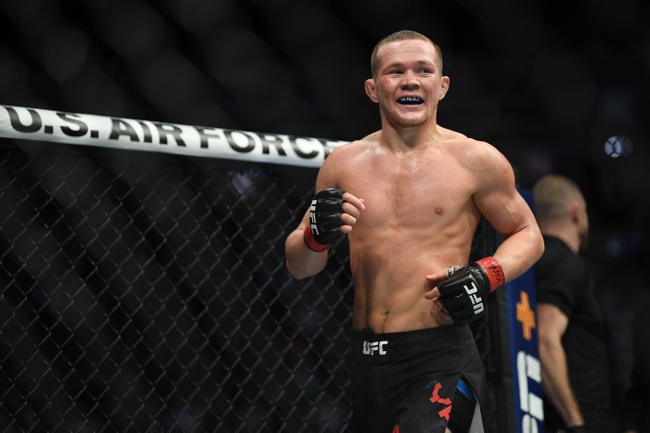 Petr Yan enters this fight with a 14-1 record and has won 50 percent of his fights by decision. Yan has won each of his last nine fights and is coming off a December win over Urijah Faber. Yan is averaging 5.65 significant strikes per minute with an accuracy percentage of 46 percent. Yan is averaging 1.73 takedowns with an accuracy percentage of 53 percent. Yan is now 6-0 under the UFC banner and is coming off a bout where he earned performance of the night honors at UFC 245. In the victory, Yan produce a third round knockout via head kick, a fight he was dominating up to that point anyway. Yan is your typical tough Russian who has a strong chin and is willing to trade strikes, as he’s walked down all of his opponents up to this point. Yan grew up fighting in the streets and comes from a deep boxing background that he picked up from his brother. That’s been Yan’s fighting style throughout his career, as he keeps his hands up, walks down his opponent and follows up his jab with a strong right hand. Yan also has a dangerous elbow that he likes to throw in the clinch and now opponents also have to watch his legs after his last bout. Yan has arguably the best standup in this division and he loves his chances as long as he avoids the canvas. This will be Yan’s first career fight in Abu Dhabi.

Jose Aldo enters this fight with a 28-6 record and has won 61 percent of his fights by knockout. Aldo has split his last 10 fights and is coming off a December loss to Marlon Moraes. Aldo is averaging 3.47 significant strikes per minute with an accuracy percentage of 44 percent. Aldo is averaging 0.64 takedowns with an accuracy percentage of 65 percent. Aldo is coming off a split decision loss at UFC 245 in his bantamweight debut, as his opponent was more accurate with his strikes and produced a takedown. Aldo has lost back-to-back fights and four of his last six fights overall, and as he approaches 34 years old, it’s fair to question if the Brazilian has his best days behind him. Aldo is a black belt in BJJ and has a background in Muay Thai. Aldo is most known for his power striking and his leg kicks, and three of his last six victories have come by knockout. Aldo is also one of the more well conditioned fighters that’s allowed him to win 10 of his 12 career decisions, and he has a takedown defense percentage of 91 percent. Aldo gets to fight where he’s most comfortable and it’s led to a Hall of Fame career. This will be Aldo’s first career fight in Abu Dhabi.

While Aldo has been on the losing side more and more lately, you can never overlook a champion and one of the best to ever do it, which makes these big plus money odds intriguing. Aldo is going to get a comfortable fight on his feet and probably has the edge on the ground if this ever gets there. The problem is Yan is a fighter I don’t bet against due to his boxing being so crisp, a style many have a hard time matching up against. Maybe it’s the bias of me being a boxing fan who eventually transferred over to MMA, but Yan is so polished in his standup that I have a hard time seeing guys in this division beating him.

Yan leaves the octagon with the belt.