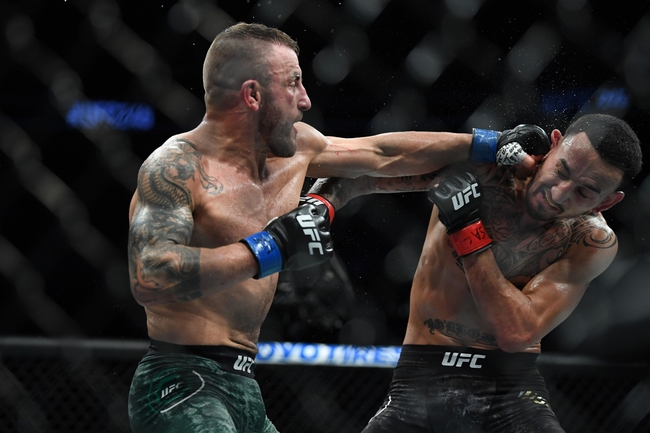 Alexander Volkanovski enters this fight with a 21-1 record and has won 52 percent of his fights by knockout. Volkanovski has won last 18 fights and is coming off a December win over Holloway. Volkanovski is averaging 6.15 significant strikes per minute with an accuracy percentage of 57 percent. Volkanovski is averaging 2.16 takedowns with an accuracy percentage of 34 percent. Volkanovski is coming off the biggest win of his carer where he won the UFC Featherweight Championship and cashed as a nice +150 underdog. In the victory, Volkanovski landed 157 total strikes and landed 51 percent of his significant strikes. A really strong fighter with extreme pop in his hands and a boxing background, Volkanovski has some of the better standup striking in the sport and counters very well. Volkanovski is also an effective takedown artist with a strong upper body and a wrestling background. Volkanovski also defends takedowns at a very high level, so he’s going to force his opponent to fight the fight he wants and that gives him a great deal of confidence. This will be Volkanovski’s first career fight in Abu Dhabi.

Max Holloway enters this fight with a 21-5 record and has won 48 percent of his fights by knockout. Holloway has won 14 of his last 16 fights and is coming off a December loss to Volkanovski. Holloway is averaging 6.66 significant strikes per minute with an accuracy percentage of 44 percent. Holloway is averaging 0.24 takedowns with an accuracy percentage of 83 percent. Holloway has now dropped two of his last three fights and has been beaten up good in those two losses. Holloway landed some nice shots of his own and once again showed his toughness, but he was outclassed on the feet for five rounds and those wars and beatings usually have a negative impact on fighters moving forward. Still, Holloway is one of the most well conditioned fighters in the sport who is usually effective throughout five rounds and is usually the fighter who keeps coming forward and overwhelms opponents with his work rate. Holloway hides his shots well and has a wide variety of attacks in his tool box, as he can be a bit unpredictable and throw kicks or elbows out of nowhere. Few are also as tough as Holloway, as he’s eaten some massive shots over his last two fights and didn’t fold. This will be Holloway’s first career fight in Abu Dhabi.

Holloway has been beat up in two of his last three fights and the last meeting against Volkanovski wasn’t pretty. Not only are the losses concerning, but fighters usually don’t get better after being in wars and taking a great deal of punishment. There’s concern for Holloway right now and there should be a lot of pressure on him to bounce back. Volkanovski is a hell of a striker and this fight should be a lot similar to the last one given that both fighters have such strong takedown defense. Still, I’m leaning toward Holloway and the plus money. This is the first time Holloway has opened as an underdog since UFC 212 against Jose Aldo, so a part of me is considering that value. Holloway is also a champion who has only lost back-to-back fights once in his career and considered by many to be the best featherweight of all time. I’d imagine Holloway will make some adjustments, focus a little more defensively and mix in his kicking game early.

I can’t turn down this price with Holloway.