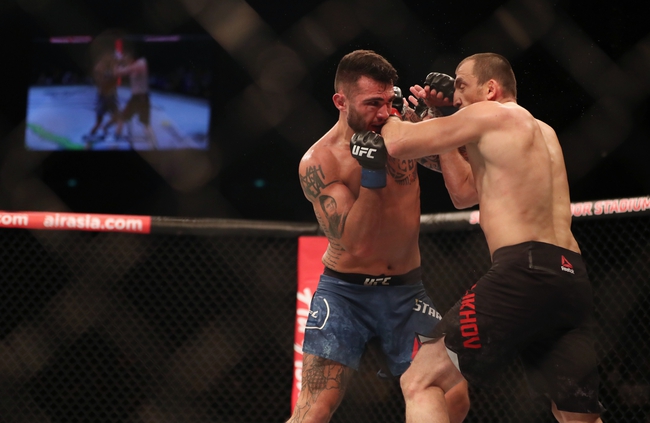 Elizeu Zaleski dos Santos enters this fight with a 22-6 record and has won 64 percent of his fights by knockout. dos Santos has won eight of his last nine fights and is coming off a March win over Alexey Kunchenko. dos Santos is averaging 4.17 significant strikes per minute with an accuracy percentage of 39 percent. dos Santos is averaging 0.65 takedowns with an accuracy percentage of 20 percent. dos Santos is coming off a decision victory at UFC Fight Night 170 where he landed 74 total strikes and produced two takedowns. dos Santos has now won each of his last four decisions and is 8-2 for his career under the UFC banner. dos Santos is a striker at heart with a background in Muay Thai and a black belt in BJJ, and he relies on rapid combinations and elite athleticism, and few fighters in this sport are as effective with their legs and knees as he is. dos Santos has a variety of strikes in his tool box and he can be a bit wild or unpredictable at times, as a flying knee or a spinning kick could come at any moment. dos Santos is most comfortable on his feet, but he can wrestle on the ground if needed and all three of his submission victories have come by the rear-naked choke. This will be dos Santos’ first career fight in Abu Dhabi.

Muslim Salikhov enters this fight with a 16-2 record and has won 75 percent of his fights by knockout. Salikhov has won 14 of his last 15 fights and is coming off an October win over Laureano Staropoli. Salikhov is averaging 2.92 significant strikes per minute with an accuracy percentage of 46 percent. Salikhov is averaging 1.22 takedowns with an accuracy percentage of 42 percent. Salikhov is coming off a comfortable decision victory at UFC Fight Night 162 where he landed 64 total strikes and produced three takedowns. Salikhov has now won each of his last three fights and is 3-1 under the UFC banner. Salikhov is an interesting fighter who has a background in Wushu Sanda and kickboxing, so he’s constantly busy with his legs and throws a wide variety at his opponent. Salikhov is very busy with his approach and will set his opponent up for something hard if he’s not careful. Salikhov also has a background in Shuai jiao, so his wrestling is up to date and he can hold his own on the canvas if needed. This will be Salikhov’s second career fight in Abu Dhabi.

This is one of the more fun fights on the entire card, as both of these guys have high work rates and extreme knockout power. dos Santos is probably the more balanced in terms of his attack and has a wider variety of strikes he can throw, but Salikhov is going to chop down on the legs and can land a body shot as well that drops his opponent. This is a flip a coin style fight with so much similarity, but I’m giving the slight edge to Salikhov.

The leg kicks should be the difference in this bout.