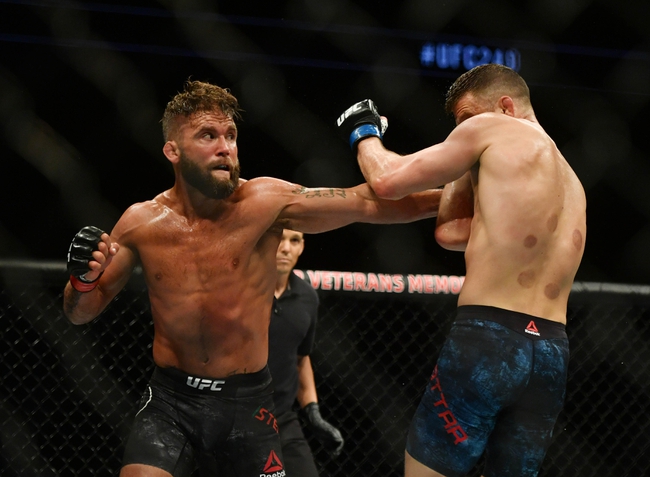 Calvin Kattar enters this fight with a 21-4 record and has won 52 percent of his fights by knockout. Kattar has won six of his last eight fights and is coming off a May win over Jeremy Stephens. Kattar is averaging 5.29 significant strikes per minute with an accuracy percentage of 41 percent. Kattar is averaging 0.42 takedowns with an accuracy percentage of 28 percent. Kattar is coming off a second round knockout at UFC 249, beating his opponent who missed weight. Kattar is on a rather quick turnaround and hopes to build on his impressive 5-2 record under the UFC banner. Kattar has a high school wrestling background and showed some of his submission game earlier in his career, but he’s somebody who appears much more comfortable on his feet and simply unloads bombs. Kattar is polished with his boxing, as he sets his punches up well and throws with a purpose, and he has the power to end things with one shot. Kattar stuffs takedowns well, throws haymakers and each of his last four victories have ended in knockouts. This will be Kattar’s first career fight in Abu Dhabi.

Dan Ige enters this fight with a 14-2 record and has won 43 percent of his fights by decision. Ige has won each of his last six fights and is coming off a May win over Edson Barboza. Ige is averaging 4.12 significant strikes per minute with an accuracy percentage of 48 percent. Ige is averaging 2.15 takedowns with an accuracy percentage of 34 percent. Ige is coming off an impressive split decision victory where he landed 100 total strikes and produced one takedown. Ige has now won his last two fights by split decision. Ige is now 6-1 since participating in Dana White's Contender Series 3 three years ago. Ige is a black belt in BJJ and has some knockout power, but he’s been most impressive on the canvas and has displayed quite a gas tank that’s allowed him to win six of his eight career decisions. Ige has solid defense standing up and has five submission victories for his career. At 28 years old, Ige is starting to make a name in the featherweight class and could see a title shot eventually if he stays on this pace. This will be Ige’s first career fight in Abu Dhabi.

Ige and the big plus money is worth a look simply because we’re getting a confident fighter on an impressive winning streak and a guy who doesn’t quit. Ige is also probably the more balanced fighter given his takedown ability and his high level BJJ. With that said, I’m still backing Kattar in this fight because of his standup accuracy and power. Ige can be a bit wild on the feet and that opens Kattar to land some nasty counters and eventually put this fight away.

I wouldn’t talk you off the ledge if you wanted to back Ige and the big payout, but Kattar is the much safer bet here.