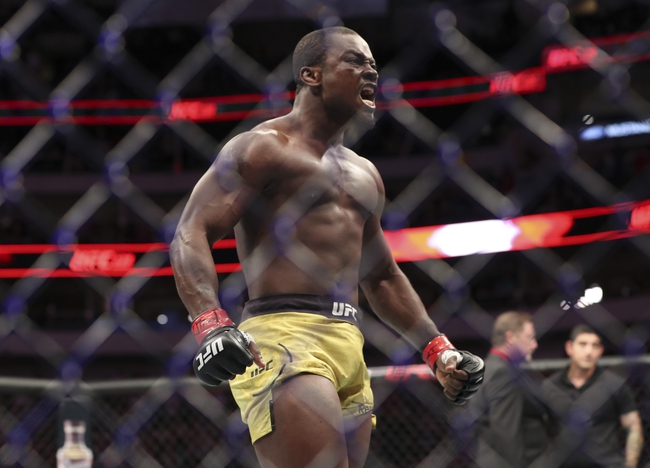 Abdul Razak Alhassan enters this fight with a 10-1 record and has won 100 percent of his fights by knockout. Alhassan has won each of his last three fights and is coming off a September (2018) win over Niko Price. Alhassan is averaging 4.59 significant strikes per minute with an accuracy percentage of 46 percent. Alhassan is averaging 0.57 takedowns with an accuracy percentage of 33 percent. Alhassan is coming off an overwhelming knockout victory at UFC 228 that ended in the first round. Alhassan has seen each of his last three fights end in first round knockouts and he’s now 4-1 under the UFC banner. Alhassan is an athletic fighter with devastating power and a high work rate. Alhassan wants to stand in the pocket and throw haymakers until his opponent drops and it’s worked for him up to this point. And while Alhassan’s striking gets most of the attention, he’s also a black belt in Judo, so his wrestling and grappling can’t go overlooked. The only concern is that Alhassan has been out of the octagon for a while due to legal issues, so there’s some potential rust with the near 35-year-old. This will be Alhassan’s first career fight in Abu Dhabi.

Mounir Lazzez enters this fight with a 9-1 record and has won 89 percent of his fights by knockout. Lazzez has won five of his last six fights and is coming off a February win over Arber Murati. Lazzez is the first UFC fighter born and raised in an Arab country, and he’ll make his debut coming over from Probellum MMA. Lazzez actually got his big break when Dana White saw his highlight reel in a Las Vegas restaurant, which is a cool story to tell the kids. As for Lazzez’s skill set, he’s primarily an athletic striker with heavy hands and quick kicks that he’ll throw out of nowhere and have actually helped produce a few of his knockouts. Lazzez is a bit unpredictable and wild on the feet, but it’s beautiful when it connects. Lazzez has also added wrestling to his toolbox and while you see very little of it on his highlights, it’s clear Lazzez is working to become a more balanced fighter and hopes to make an impact right away. This will be Lazzez’s first career fight in Abu Dhabi.

This should be a fun fight between two heavy strikers with high knockout percentages. Alhassan is the safer bet given his more proven resume and knowing what he does on these big stages, but he’s also somebody who has been out of the octagon for a while. Octagon rust is a thing and it doesn’t help him making his return under these weird circumstances. Lazzez may not have the resume, but the kid is extremely talented and his disguised kicks throw a monkey wrench into this whole fight. Alhassan can’t sit in the pocket and punch his way to victory like he’s used to knowing that a head kick could come out of nowhere.

I’m going to take a chance with Lazzez and these big odds.