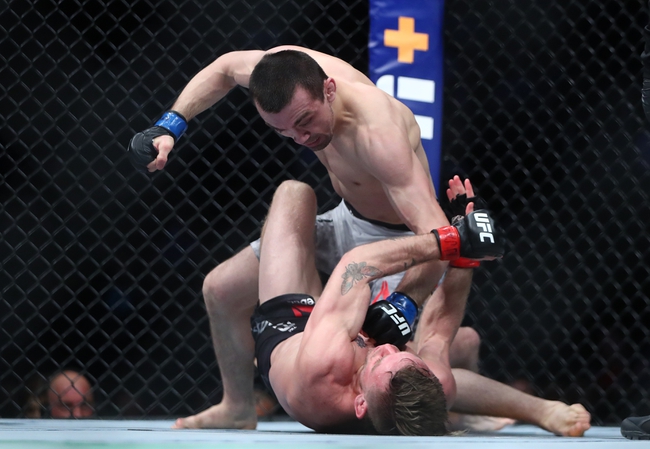 Tim Elliott enters this fight with a 15-11-1 record and has won 40 percent of his fights by decision. Elliott has lost five of his last seven fights and is coming off a May loss to Brandon Royval. Elliott is averaging 3.41 significant strikes per minute with an accuracy percentage of 46 percent. Elliott is averaging 4.31 takedowns with an accuracy percentage of 55 percent. Elliott is coming off a second round submission loss at UFC on ESPN 9 that earned fight of the night honors. Elliott has not won a fight since UFC 219 and it’s key he gets back on track soon as he approaches 34 years old at the end of the year. Elliott is an energetic fighter who can be a bit wild on his feet as he pressures forward and swings wildly, and he has good scrambling ability with a blue belt in BJJ and a wrestling background. Eleven of Elliott’s 27 carer fights have ended in submission, so it’s an indication of where most of his fights end up. Elliott has ability and has shared the octagon with some of the best, but it’s key he gets a victory here to snap a rough losing skid. This will be Elliott’s first career fight in Abu Dhabi.

Ryan Benoit enters this fight with a 10-6 record and has won 80 percent of his fights by knockout. Benoit has split his last 10 fights and is coming off a December loss against Alateng Heili. Benoit is averaging 2.80 significant strikes per minute with an accuracy percentage of 40 percent. Benoit is averaging 0.20 takedowns with an accuracy percentage of 16 percent. Benoit has been a mixed bag over the last seven years and is coming off a split decision loss at UFC Fight Night 165 where he landed more total strikes but was taken down four times. While the results have been inconsistent, Benoit still has yet to lose back-to-back fights in his career. Benoit is an explosive, athletic fighter with terrific striking power in both hands and impressive leg kicks that he hides well. Benoit has seen eight of his 10 wins come by knockout and despite the wild, aggressive style, he’s never been knocked out himself. Benoit has been on the losing side of four of his five career decisions, which is a sign of not being able to keep up the wild pace for three rounds. Benoit is fun to watch and can end things at any moment, but he’s lost four of his last seven fights that made it out of the first round. This will be Benoit’s first career fight in Abu Dhabi.

Benoit is the younger, more explosive fighter at this stage and has more pop in his hands, so there’s reason to consider him and the cheaper price. Elliott is also in horrible form right now with three straight losses. However, desperation usually brings out the best in fighters and I’d say nobody on this card needs the win more than Elliott. Benoit was also scheduled to fight Tyson Nam last month and the fight didn’t go through, so now he has to plan for a completely different fighter on somewhat short notice. I’d also argue Elliott has the bigger gas tank, which could be key in this fight that probably is decided on the scorecards.

I’m going to side with Elliott to break the losing streak.