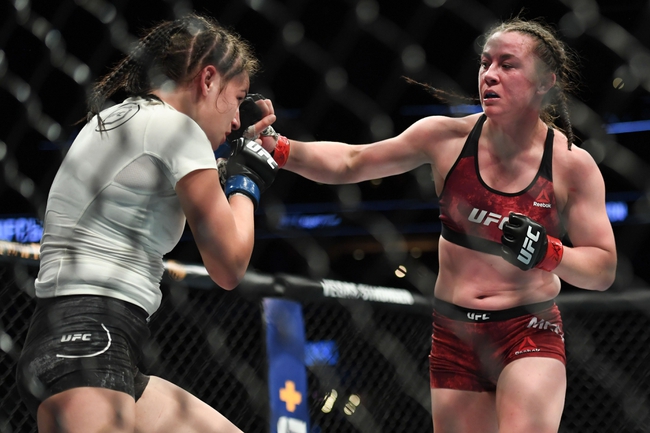 Molly McCann enters this fight with a 10-2 record and has won 60 percent of her fights by decision. McCann has won her last three fights and is coming off an October win over Diana Belbiţă. McCann is averaging 6.49 significant strikes per minute with an accuracy percentage of 49 percent. McCann is averaging 2.59 takedowns with an accuracy percentage of 33 percent. McCann improved to 3-1 under the UFC banner with a comfortable victory at UFC on ESPN 6 where she landed 126 total strikes and produced five takedowns. McCann has now seen each of her last three victories end in decision and she’s 6-1 in decisions for her career. McCann is a purple belt in BJJ and has some solid success with her takedown attempts, but she’s most known for her aggressive standup and power punching. McCann stands in the pocket and throws wild, powerful combinations while displaying her toughness. McCann will throw knees to the body in the clinch and has a strong ground and pound if a fight goes to the canvas. McCann also has a high gas tank that allows her to keep up the pace for three rounds. This will be McCann’s first career fight in Abu Dhabi.

Taila Santos enters this fight with a 15-1 record and has won 67 percent of her fights by knockout. Santos has won five of her last six fights and is coming off a February (2019) loss to Mara Romero Borella. Santos is averaging 4.23 significant strikes per minute with an accuracy percentage of 49 percent. Santos is averaging one takedown with an accuracy percentage of 100 percent. Santos lost her UFC debut at UFC Fight Night 144 where she ate 84 total strikes and was taken down twice. Santos lost the bout in a split decision and it was the first loss of her career. Santos has a brawler feel to her fighting style, as she throws heavy hands with legit knockout power, she’ll mix in some kicks here and there and some of her fights have ended in brutal finishes. Five of Santos’ last seven victories have ended in knockouts. Santos has some wrestling ability and has won two fights by submission, but she’s most comfortable on the feet where she can push the pace and let her hands go. This will be Santos’ first career fight in Abu Dhabi.

Santos has the power and a massive reach advantage in this fight, so that’s probably why the odds are so close for this bout. However, Santos hasn’t proven herself on the big stage quite yet and a lot of her opponents suggest the record isn’t as impressive as it is on the surface. McCann is the more proven fighter who is also more polished on the feet, who has the chin and the hands to go toe-to-toe with Santos in the standup. I like McCann by a decent margin and these cheap odds make it one of the better bets on the board.

Give me McCann easily here.