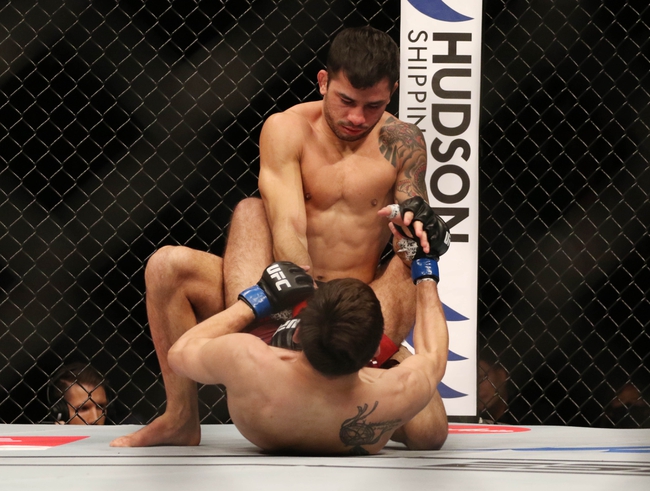 Alexandre Pantoja enters this fight with a 22-4 record and has won 36 percent of his fights by knockout. Pantoja has won six of his last eight fights and is coming off a December win over Matt Schnell. Pantoja is averaging 4.58 significant strikes per minute with an accuracy percentage of 47 percent. Pantoja is averaging 1.10 takedowns with an accuracy percentage of 35 percent. Pantoja is coming off a win at UFC Fight Night 165 where he produced a first round knockout and earned performance of the night. Pantoja is now 6-2 under the UFC banner and is one of the more exciting fighters to watch, as he’s a ball of energy in the octagon who throws wild punches, is down to trade standing up and has terrific scrambling ability. Whether it’s throwing wild punches standing up or wrestling on the ground with high athleticism, Pantoja is a joy to watch and very balanced to where he can hold his own wherever the fight goes. This will be Pantoja’s first career fight in Abu Dhabi.

Askar Askarov enters this fight with a 11-0-1 record and has won 64 percent of his fights by submission. This will be Askarov’s third fight since 2019, and he’s coming off a January win over Tim Elliott. Askarov is averaging 3.43 significant strikes per minute with an accuracy percentage of 48 percent. Askarov is averaging two takedowns with an accuracy percentage of 22 percent. Askarov won his first UFC fight at UFC 246 where he landed 96 total strikes and was far more accurate with his significant shots. Askarov is a talented Russian who put together a great resume before the UFC and relied heavily on his grappling and cardio. Askarov has seven career submission victories where he controls the canvas well and also has the ability to get up if things aren’t going his way. Askarov is also better on his feet than some would expect, as he has great timing, footwork and has some underrated pop in his hands. Askarov is also deadly with his leg kicks in the stand up. This will be Askarov’s first career fight in Abu Dhabi.

Askarov at this price holds great value when you consider he’s probably the better wrestler, is decent enough on his feet and has the cardio advantage. Askarov has a lot going for him in this bout that makes the plus money highly intriguing. Still, I lean toward Pantoja anyway, because he’s going to push the pace, be the aggressor and has the power edge to where he can end things before Askarov can. Pantoja is also a highly skilled scrambler, so I don’t believe Askarov will ever get this fight where he’s most comfortable.

Price isn’t great, but Pantoja should win this fight nonetheless.