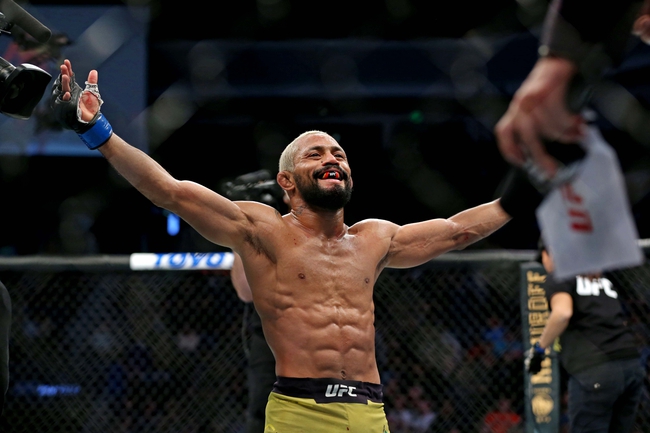 Deiveson Figueiredo enters this fight with a 18-1 record and has won 50 percent of his fights by knockout. Figueiredo has won five of his last six fights and is coming off a February win over Joseph Benavidez. Figueiredo is averaging 2.54 significant strikes per minute with an accuracy percentage of 52 percent. Figueiredo is averaging 1.81 takedowns with an accuracy percentage of 50 percent. Figueiredo is coming off a second round knockout at UFC Fight Night 169, a fight he was probably losing on the cards up to that point. Figueiredo has now won three straight fights since his first career loss against Jussier Formiga, and his last two wins have been finishes. Figueiredo is a balanced fighter who has great takedown ability, can fight from his back and is quite slippery on the canvas with his scrambling ability. Figueiredo has solid wrestling ability and has six career submissions with four of them coming via guillotine choke. Figueiredo is also skilled on the feet with knockout power and solid head movement that make it tough for an opponent to land cleanly. At 32 years old, Figueiredo has more than proven he’s one of the best and possibly most underrated fighter in the sport currently. This will be Figueiredo’s first career fight in Abu Dhabi.

Joseph Benavidez enters this fight with a 28-6 record and has won 39 percent of his fights by decision. Benavidez has won six of his last eight fights and is coming off a February loss to Deiveson Figueiredo. Benavidez is averaging 3.53 significant strikes per minute with an accuracy percentage of 34 percent. Benavidez is averaging 1.50 takedowns with an accuracy percentage of 30 percent. Benavidez was probably winning the first bout between these two, but he ate a right hand in the second round and was finished with some light punches on the canvas. Benavidez now hopes to avoid back-to-back losses for the first time in his career. Despite soon being 36 years old, Benavidez is still the wild, fast and aggressive fighter he’s always been, as his standup is very unpredictable and creative. Benavidez will rush his opponent with big combinations that aren’t always accurate but the work rate gives him an edge, and he’ll mix in flying knees and kicks in the middle of combinations. Benavidez isn’t always the sexiest or most fundamentally sound fighter in the world, but his aggressiveness looks good to judges on the cards and he only needs one shot to land for the fight to flip in his favor. Benavidez also has a background in wrestling and has nine submission victories, so he’s more than capable of holding his own on the ground when needed. This will be Benavidez’s first career fight in Abu Dhabi.

You can make a case for Benavidez in this fight given that he was probably ahead on the scorecards after one round and was landing more up to the point of being finished. However, Benavidez had a serious defensive issue where he’d throw a leg kick and drop his hands, and that’s what led to him getting rocked. Figueiredo is too experienced and too talented to come in like a raging bull and throw crazy combinations while not focusing on defense at all. Adjustments will be made, but you still have to favor Figueiredo in this bout.

I’ll lay the juice with Figueiredo in the rematch.