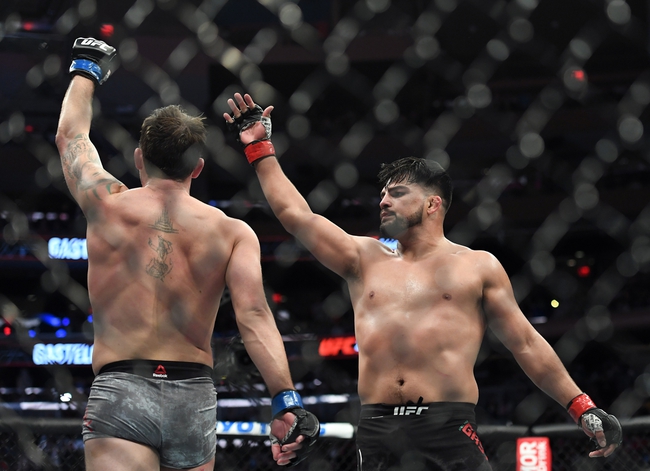 Jack Hermansson enters this fight with a 20-5 record and has won 55 percent of his fights by knockout. Hermansson has won six of his last eight fights and is coming off a September loss to Jared Cannonier. Hermansson is averaging 5.13 significant strikes per minute with an accuracy percentage of 48 percent. Hermansson is averaging 2.23 takedowns with an accuracy percentage of 36 percent. Hermansson is coming off a second round knockout loss at UFC Fight Night 160 where he lost in front of his home fans of Denmark in disappointing fashion. It was a close fight up to that point, but Hermansson now hopes to avoid back-to-back losses for the first time since his Bellator days. Hermansson has an aggressive standup approach where he’s constantly forcing the issue and throwing these strong overhand strikes that have some knockout pop. Hermansson is also a pretty successful takedown artist with a wrestling background that goes way way back to when he was a child. Hermansson is well conditioned and kind of mucks things up in the octagon a bit, but he’s still produced finishes in five of his last six victories. Hermansson just finds ways to win, even if his style isn’t always the prettiest. This will be Hermansson’s first career fight in Abu Dhabi.

Kelvin Gastelum enters this fight with a 15-5-1 record and has won 40 percent of his fights by knockout. Gastelum has split his last four fights and is coming off a November loss to Darren Till. Gastelum is averaging 3.75 significant strikes per minute with an accuracy percentage of 43 percent. Gastelum is averaging 0.80 takedowns with an accuracy percentage of 35 percent. Gastelum is coming off a tough split decision loss at UFC 244 where he landed more total strikes but was less accurate with his significant strikes. Gastelum has now lost back-to-back fights for the first time in his career, with his last victory taking place at UFC 224. Gastelum comes from a wrestling and boxing background, and he’s a black belt in 10th Planet Jiu-Jitsu. Gastelum has such great technique to his standup and puts together some of the cleanest combinations regardless of weight class. Gastelum also has one of the tougher chins in the sport and has yet to be knocked out despite five career losses. Gastelum has decent takedown defense and three of his four career submissions have come via rear-naked choke. Once Gastelum finds an opening and gets his timing down, he’s highly aggressive and is looking to put away his opponent. This will be Gastelum’s first career fight in Abu Dhabi.

Hermansson and this price is highly appealing, as he’s a balanced fighter with an unorthodox style and has been on a finish streak these last few years. Gastelum is coming off back to back losses and it’s going to be interesting to see how he rebounds from such a disappointing result. With that said, I’m till leaning toward Gastelum in this bout because he has a clear edge on the feet while the ground game is probably a wash. As long as Gastelum can defend a couple of takedowns early, he should keep this fight where he wants it and cruise to victory.

Give me Gastelum in a much needed bounce back victory.