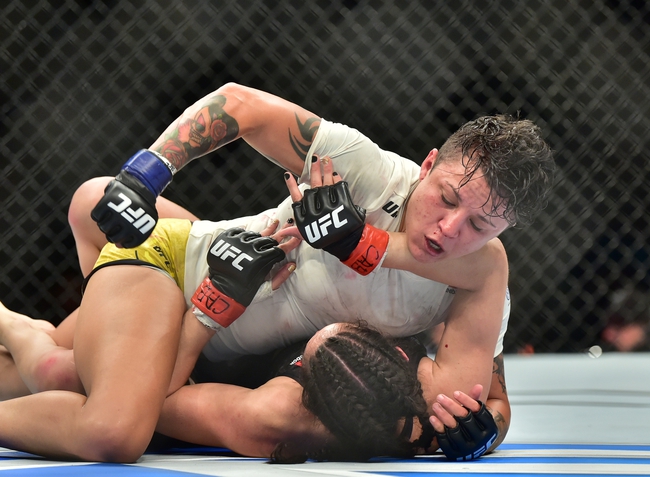 Ariane Lipski enters this fight with a 12-5 record and has won 50 percent of her fights by knockout. Lipski has split her last four fights and is coming off a November win over Isabela de Pádua. Lipski is averaging 3.38 significant strikes per minute with an accuracy percentage of 31 percent. Lipski is averaging 0.33 takedowns with an accuracy percentage of 100 percent. Lipski is coming off her first UFC victory at UFC Fight Night 164 where she landed 175 total strikes. The win snapped a two fight losing skid, and Lipski has seen each of her last four bouts go the distance. Lipski entered the UFC as one of the top prospects in the country and it’s important she starts stringing wins together to build on that hype. Lipski is a striker at heart who relies on her technical ability along with accuracy, speed and combinations. Lipski is more than willing to trade in the pocket and has above-average power for this division to put fighters away. Lipski is also an udneratted grappler and has two career submission victories. This will be Lipski’s first career fight in Abu Dhabi.

Luana Carolina enters this fight with a 6-1 record and has won 50 percent of her fights by decision. Carolina has won each of her last six fights and is coming off a May (2019) win over Priscila Cachoeira. Carolina is averaging 6.53 significant strikes per minute with an accuracy percentage of 50 percent. Carolina is averaging zero takedowns with an accuracy percentage of zero percent. Carolina won her UFC debut at UFC 237 after landing 126 total strikes and avoiding two takedown attempts. Carolina will now fight for the first time in over a year, and she hasn’t lost a fight since her pro debut in 2015 against Daiane Firmino. Carolina is also coming off a fractured spine, so it’s going to be interesting to see her form for multiple reasons. Carolina is a busy fighter who isn’t afraid to let her hands go and touch her opponent over and over again. Carolina is also effective in the clinch where she’ll mix in some knees and just wear on her opponent. Carolina is also a well conditioned fighter and has been on the winning side in three of her four career decisions. This will be Carolina’s first career fight in Abu Dhabi.

Lipski hasn’t exactly lived up to expectations since joining the UFC, but I’m not ready to give up on her just yet. Lipski is still a highly talented striker who could easily see a title shot if she strings a couple more wins together. Carolina doesn’t have the wrestling to take Lipski out of her comfort zone, and she’s been out of the octagon for a while on top of dealing with a serious injury. In a pick em fight, I’m going to go with the fighter I have less question marks about.