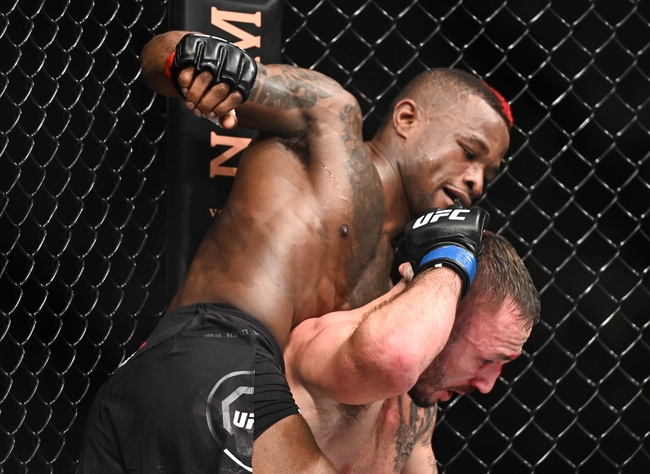 Marc Diakiese enters this fight with a 14-3 record and has won 50 percent of his fights by decision. Diakiese has split his last six fights and is coming off a September win over Lando Vannata. Diakiese is averaging 2.86 significant strikes per minute with an accuracy percentage of 37 percent. Diakiese is averaging 2.50 takedowns with an accuracy percentage of 40 percent. Diakiese is coming off a decision victory at UFC Fight Night 160 where he was more accurate with his big shots and produced four takedowns. Diakiese is now 5-3 under the UFC banner and looks for his third straight victory overall. Diakiese has a background in kickboxing and Muay Thai, and he appears most comfortable with the stand up where he throws a variety of strikes and has finishing power. Diakiese can be a bit unpredictable on the feet, but he also has a purple belt in BJJ and produced a submission victory rather early in his pro career, so he can hold his own on the ground if needed. This will be Diakiese’s first career fight in Abu Dhabi.

Rafael Fiziev enters this fight with a 7-1 record and has won 71 percent of his fights by knockout. Fiziev has won three of his last four fights and is coming off an October win over Alex White. Fiziev is averaging 4.08 significant strikes per minute with an accuracy percentage of 50 percent. Fiziev is averaging 0.91 takedowns with an accuracy percentage of 100 percent. Fiziev got his first UFC victory at UFC Fight Night 162 where he landed 73 total strikes and stuffed 11 takedown attempts. Fiziev is now 1-1 under the UFC banner and bounced back nicely from a rough loss in his debut. Fiziev is also a fighter who relies heavily on his Muay Thai and kickboxing background, and he has some incredible finishes on his feet due to his athleticism and speed. Fiziev has good defense on the feet as well and above average had movement. While Fiziev wants a fight standing up and just showed impressive takedown defense, he does have a submission victory on his small pro resume and has displayed a confident ground and pound attack as well. This will be Fiziev’s first career fight in Abu Dhabi.

Fiziev is a respectable fighter and highly skilled on the feet and capable of winning this fight. However, Fiziev is also low on the experience and most of his fights have ended in the first round, so I am a bit concerned when stepping up in competition. Fiziev doesn’t have enough reps that give me the confidence he can hang with somebody as talented and seasoned as Diakiese.

You can make a strong argument Diakiese should be a bigger favorite. I’ll take these odds.