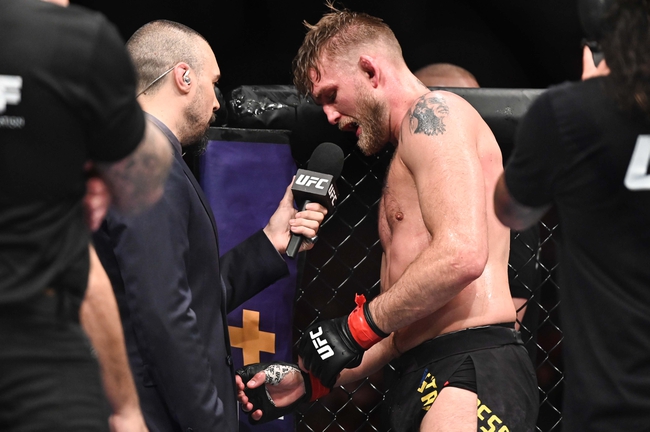 Fabricio Werdum and Alexander Gustafsson fight Saturday during UFC on ESPN 14 at the Flash Forum.

Fabricio Werdum enters this fight with a 23-9-1 record and has won 48 percent of his fights by submission. Werdum has split his last eight fights and is coming off a May loss to Aleksei Oleinik. Werdum is averaging 3.61 significant strikes per minute with an accuracy percentage of 52 percent. Werdum is averaging 1.71 takedowns with an accuracy percentage of 31 percent. Werdum is coming off a split decision loss at UFC 249 where he was the more accurate fighter but far less busy. Werdum has now lost back-to-back fights for the first time in his career and is on a rather quick turnaround given the pandemic and his age. Werdum is an accurate striker with some knockout power, but he’s a rare heavyweight who is most known for his grappling ability and ground game. Werdum is one of the more accomplished submission grapplers in the history of the sport, and he’s a black belt in BJJ, Judo and Muay Thai. Werdum is most successful when he gets his hands on his opponent and either takes it to the ground or against the cage. Werdum will throw knees and elbows in the clinch, and he’s an obvious nightmare on the ground with the ability to end things with a single mistake. The issue is Werdum is days away from being 43 years old and way past his prime at this point. This will be Werdum’s first career fight in Abu Dhabi.

Alexander Gustafsson enters this fight with a 18-6 record and has won 61 percent of his fights by knockout. Gustafsson has split his last 10 fights and is coming off a June (2019) loss to Anthony Smith. Gustafsson is averaging 4.02 significant strikes per minute with an accuracy percentage of 40 percent. Gustafsson is averaging 1.56 takedowns with an accuracy percentage of 39 percent. Gustafsson is coming off a fourth round submission loss at UFC Fight Night 153, a fight he may have been winning on the cards up to that point. Gustafsson now hopes to avoid three straight losses for the first time in his career. There’s really no surprises with Gustafsson, as he’s a volume striker with a boxing background and does most of his best work on the feet. Gustafsson has solid footwork, puts his combinations together nicely and has produced 11 career knockouts. Gustafsson is also a purple belt in BJJ and has ended three fights with the rear-naked choke, so he’s got a little balance to his attack. This will be Gustafsson’s second career fight in Abu Dhabi.

Werdum is not somebody to look past, as we’ve seen old fighters with top tier grappling and wrestling have success. Unlike striking, quickness and power, a quality ground game doesn’t fade and allows fighters to hang around longer than they should. With that said, Werdum didn’t look good his last time out and age is a factor no matter how much we want to avoid it. Gustafsson has a clear edge on the feet in the fight and is good enough in the clinch and with the takedown defense to keep this bout where he wants it. I also don’t put a ton of stock into Gustafsson losing to Jon Jones and Joshua, as those are quality losses, and you can argue he was winning his last bout before the submission.

Give me Gustafsson to win this fight, and I’ll take him to win within distance to lower the price.