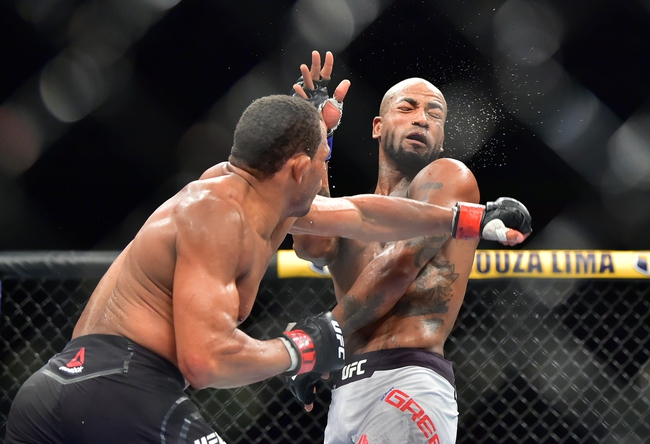 Francisco Trinaldo and Jai Herbert fight Saturday during UFC on ESPN 14 at the Flash Forum.

Francisco Trinaldo enters this fight with a 25-7 record and has won 48 percent of his fights by decision. Trinaldo has won seven of his last 10 fights and is coming off a March win over John Makdessi. Trinaldo is averaging 3.13 significant strikes per minute with an accuracy percentage of 43 percent. Trinaldo is averaging 1.02 takedowns with an accuracy percentage of 44 percent. Trinaldo is coming off a decision win at UFC Fight Night 170 where he landed less total strikes and was far less accurate with his significant strikes. Trinaldo has now seen five of his last six fights end in decisions, and he looks for three straight victories for the first time since 2016. It’s also going to be interesting to see Trinaldo take another fight so quickly given the climate and the fact he’ll soon be 42 years old. Trinaldo is known for his striking ability and punching power along with his background in kickboxing, but he has just three knockout wins in the last seven years. Trinaldo is still highly effective standing up, as his he delivers accurate strikes and is quite effective with his kicks. Trinaldo is also a brown belt in BJJ and has five submission victories, so he can hold his own on the canvas if needed, but three of his seven losses have come via submission. This will be Trinaldo’s first career fight in Abu Dhabi.

Jai Herbert enters this fight with a 10-1 record and has won 80 percent of his fights by knockout. Herbert has won each of his last six fights and is coming off an October win over Cain Carrizosa. Herbert will make his UFC debut after racking up five straight victories with Cage Warriors and producing an impressive knockout in the first round the last time we saw him. Herbert has impressive standup, where he puts his punches together clearly and can throw violent, quick strikes out of nowhere. Herbert has solid footwork as well, and his takedown defense is extremely impressive, as he stuffs shoots well and controls the clinch. Herbert doesn’t do a ton of damage on the ground, but he avoids being dragged into deep waters and keeps the fight where he’s most comfortable and extremely dangerous. This will be Herbert’s first career fight in Abu Dhabi.

Trinaldo has shown there’s still something left in the gas tank and he has the obvious track record with his history in the UFC. Herbert isn’t known to the casual MMA fans and that usually plays a roll in these betting lines. Guys bet the fighters they know. However, Herbert has violent striking and terrific takedown defense. Trinaldo is also nearly 42 years old and fighting for the second time in a short span. This is a dangerous fight for Trinaldo.

Herbert is a live underdog in this spot and I’m going to back him to win his UFC debut.