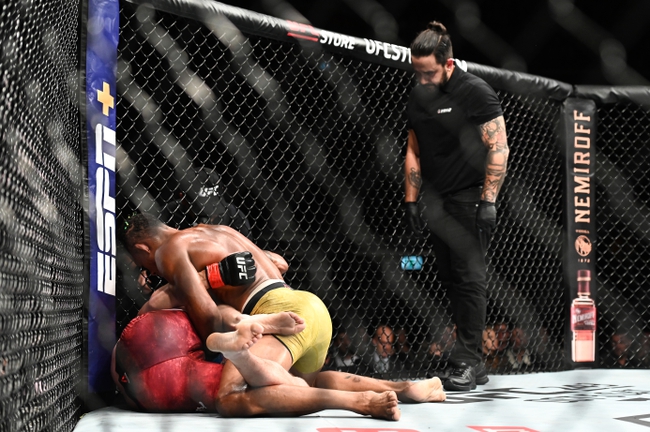 Nicolas Dalby and Jesse Ronson fight Saturday during UFC on ESPN 14 at the Flash Forum.

Nicolas Dalby enters this fight with a 18-3-1 record and has won 44 percent of his fights by decision. Dalby has won four of his last five fights, and he’s coming off a September win over Alex Oliveira. Dalby is averaging 3.03 significant strikes per minute with an accuracy percentage of 38 percent. Dalby is averaging 1.80 takedowns with an accuracy percentage of 45 percent. Dalby is coming off a convincing victory in his return to the UFC, landing 52 percent of his total strikes and earning an unanimous decision victory. Three of Dalby’s last six victories have gone the distance. Dalby is now 2-2-1 under the UFC banner. Dalby is a balanced fighter with a karate background and has proven he can be very successful with takedowns. Dalby also held his own on the canvas in his last fight when he was taken down three times. Coming off probably the biggest win of his career, Dalby is a fighter who is here to turn heads if he can build on his last bout. This will be Dalby’s first career fight in Abu Dhabi.

Jesse Ronson enters this fight with a 18-3-1 record and has won 41 percent of his fights by decision. Ronson has won six of his last eight fights, and he’s coming off a February win over Troy Lamson. Ronson is averaging 3.09 significant strikes per minute with an accuracy percentage of 46 percent. Ronson is averaging 0.67 takedowns with an accuracy percentage of 40 percent. Ronson will see his first UFC fight in six years, as he replaces the injured Danny Roberts. Ronson was previously released from the UFC after three straight split decision losses to Michel Prazeres, Francisco Trinaldo and Kevin Lee. Ronson is a striker at heart who comes from a boxing and kickboxing background and was quite accurate with his strikes in his previous UFC stint. Ronson wants a fight standing up where he can put power into his shots and four of his last eight victories have come via knockout. However, Ronson showed great ground work in his last fight and even fought off a few submission attempts to eventually get a submission victory of his own. Over the years, Ronson has become a more balanced and confident fighter, so the return here should be interesting. This will be Ronson’s third career fight in Abu Dhabi.

While Dalby is probably the safer bet in this fight, this line is giving him way too much respect. Ronson has improved a lot since being released from the UFC, as he’s more comfortable on the ground and still has that power in his striking to finish a fight. This is also a chance for Ronson to possibly make this return a little more preeminent, so he’s potentially fighting for a new contract if he impresses. Also, let’s not act like Ronson was horrible during his UFC days, as he fought tough competition and lost all three bouts in tight split decisions.

Ronson and more than double your money is a solid value bet.