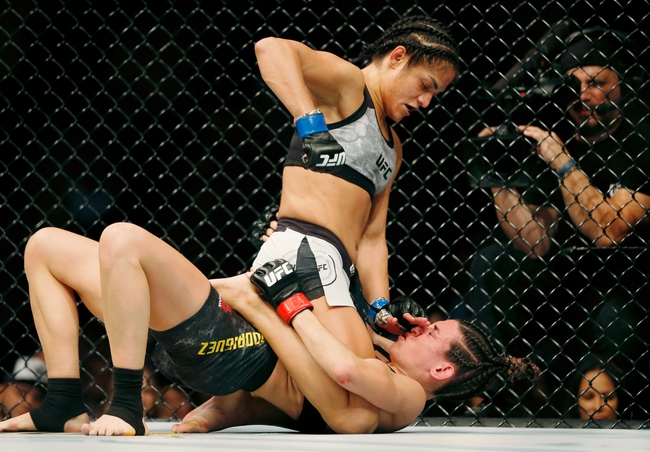 Carla Esparza and Marina Rodriguez fight Saturday during UFC on ESPN 14 at the Flash Forum.

Carla Esparza enters this fight with a 16-6 record and has won 56 percent of her fights by decision. Esparza has won five of her last seven fights and is coming off a May win over Michelle Waterson. Esparza is averaging 2.30 significant strikes per minute with an accuracy percentage of 41 percent. Esparza is averaging 3.28 takedowns with an accuracy percentage of 33 percent. Esparza is coming off a split decision win at UFC 249 where she landed slightly more strikes but was the slightly less accurate striker in significant strikes. Esparza has now been on the winning side of five of her last six decisions, and her last two bouts have been very tough to judge. Esparza looks for four straight victories for the first time since 2012-14. Esparza has a background in wrestling and Brazilian Jiu-jitsu, so she’s often looking for the takedown where she can unleash effective ground and pound on the canvas or throw elbows and knees in the clinch. Esparza lands a good portion of her significant strikes on the ground where she’s most comfortable, and she has a brown belt in BJJ. When Esparza is able to get her hands on her opponent, she likes her chances to control the fight and eventually come out victorious. The issue is Esparza’s fights can often be tough to call, but she’s won nine of her 12 career decisions. This will be Esparza’s first career fight in Abu Dhabi.

Marina Rodriguez enters this fight with a 12-0-2 record and has won 42 percent of her fights by knockout. Rodriguez has split her last four fights and is coming off a December draw against Cynthia Calvillo. Rodriguez is averaging 5.60 significant strikes per minute with an accuracy percentage of 50 percent. Rodriguez is averaging 0.48 takedowns with an accuracy percentage of 33 percent. Rodriguez is coming off a draw at UFC on ESPN 7, but you can make a strong case she lost that fight given the numbers. Rodriguez was taken down three times and outlanded for a good portion of that fight at a high percentage as well. Rodriguez has seen two of her last four fights end in a draw and all four of those bouts reached a decision. Rodriguez is a great athlete who grew up playing all sorts of sports, and she’s a blue belt in BJJ and a dark blue belt in Muay Thai. Rodriguez is a lengthy fighter who can throw some impressive overhands, and she loves mixing in leg kicks. Rodriguez is aggressive with her knees in the clinch and has good takedown defense. Rodriguez usually gets the fight where she wants it and is aggressive with her attack, mainly her kicks. This will be Rodriguez’s first career fight in Abu Dhabi.

Esparza wants a fight on the ground, but I’m not sure she’s going to get it against a good takedown defense and lengthy fighter such as Rodriguez. Up to this point Rodriguez has been great at staying on her feet, and she’s so aggressive in the clinch that it’s tough for her opponent to get comfortable to even attempt a takedown. Rodriguez is the more aggressive fighter overall and that’s bad news for Esparza who has been a bit shy offensively in her last two bouts.

Rodriguez and the reasonable price is one of the best bets on the card.