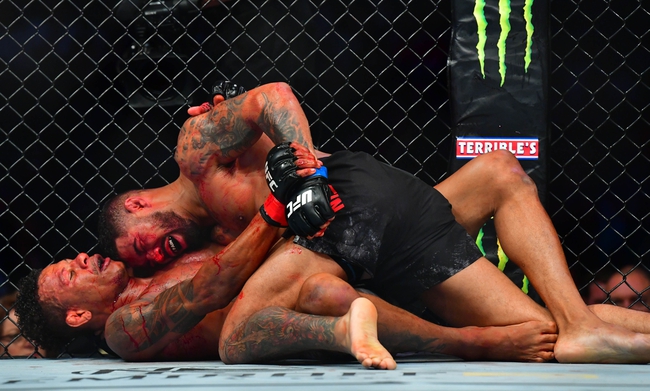 Alex Oliveira and Peter Sobotta fight Saturday during UFC on ESPN 14 at the Flash Forum.

Alex Oliveira enters this fight with a 21-8-1 record and has won 57 percent of his fights by knockout. Oliveira has split his last eight fights and is coming off a March win over Max Griffin. Oliveira is averaging 2.88 significant strikes per minute with an accuracy percentage of 50 percent. Oliveira is averaging 2.69 takedowns with an accuracy percentage of 37 percent. Oliveira is coming off a split decision victory at UFC 248 where he was more accurate with his strikes and produced a takedown. Oliveira snapped a needed three-game losing streak and now looks for back-to-back wins for the first time since 2018. Oliveira is a powerful striker with a kickboxing background and a blue belt in Muay Thai. Oliveira puts a lot into his shots, but he’s also a terrific submission artist who works the back quickly and has produced submissions in two of his last five victories. Oliveira is a tough dude who worked construction and was a bull rider before training for MMA, and he brings that working man attitude each time to the octagon. This will be Oliveira’s first career fight in Abu Dhabi.

Peter Sobotta enters this fight with a 17-6-1 record and has won 59 percent of his fights by submission. Sobotta has split his last four fights and is coming off a March (2018) loss to Leon Edwards. Sobotta is averaging 2.17 significant strikes per minute with an accuracy percentage of 39 percent. Sobotta is averaging 1.76 takedowns with an accuracy percentage of 35 percent. Sobotta is coming off a third round knockout loss at UFC Fight Night 127, a fight that was pretty competitive throughout, but he was probably losing on the scorecards anyway. Sobotta hasn’t fought in more than two years and his scheduled bout against Alessio Di Chirico back in September was canceled due to an unknown injury. There’s certainly going to be rust questions with Sobotta given the time outside of the octagon. Sobotta is a black belt in BJJ, and he has a background in Judo and Taekwondo. Sobotta has some pop in his hands, but he struggles with accuracy, so he’s far and away more comfortable on the canvas where he’s produced 10 submission victories and had a stretch where he produced six straight rear-naked chokes. Sobotta wants to drag his opponent into deep waters and is always looking to grab that neck when an opening presents itself. This will be Sobotta’s first career fight in Abu Dhabi.

Sobotta is no pushover and went three competitive rounds with a title contender the last time we saw him. The problem is Sobotta has been outside of the octagon for over two years, and I don’t enjoy backing guys who have been gone for so long. It’s hard to develop a rhythm when not fighting with any consistent schedule. Oliveira is also a tough dude to make your comeback against, as he’s good wherever the fight goes and enters the octagon wanting to get a finish.

Oliveira should win this fight and I wouldn’t be shocked if it’s a finish.