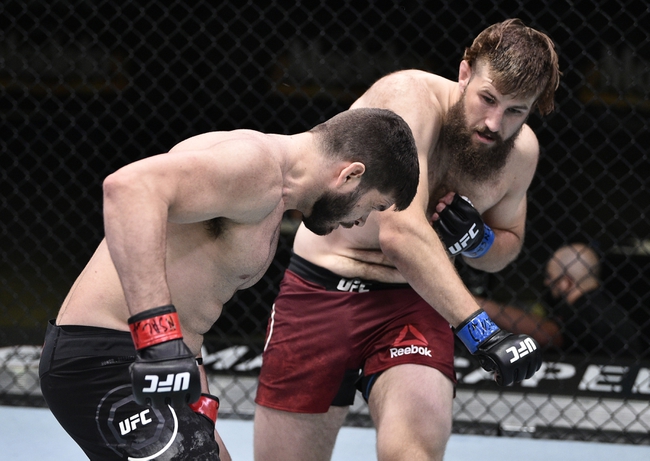 Tanner Boser and Raphael Pessoa fight Saturday during UFC on ESPN 14 at the Flash Forum.

Tanner Boser enters this fight with a 18-6-1 record and has won 50 percent of his fights by knockout. Boser has won three of his four eight fights and is coming off a June win over Philipe Lins. Boser is averaging 4.28 significant strikes per minute with an accuracy percentage of 50 percent. Boser is averaging zero takedowns with a accuracy percentage of zero percent. I said in a previous write up that Boser doesn’t have overwhelming knockout power, but his last bout may be changing the way we view him. Boser is coming off an impressive first round knockout at UFC on ESPN 12 to improve to 2-1 under the UFC banner and is being thrown into the octagon again a month later. Boser has produced knockouts in three of his last six victories. Boser relies on his cardio, hand speed, and his leg kicks are high quality. Boser is a black belt in Shitō-ryū and a purple belt in BJJ, and he has quickness for this division against bigger guys. Boser grew up studying karate, so leg kicks and footwork is a big part of his game. This will be Boser’s first career fight in Abu Dhabi.

Raphael Pessoa enters this fight with a 10-1 record and has won 60 percent of his fights by knockout. Pessoa has won five of his last six fights and is coming off an October win over Jeff Hughes. Pessoa is averaging 2.40 significant strikes per minute with an accuracy percentage of 25 percent. Pessoa is averaging zero takedowns with a accuracy percentage of zero percent. Pessoa got his first UFC victory at UFC Fight Night 162 in a bout where he was far less accurate with his significant strikes and landed less total shots. Pessoa is now 1-1 under the UFC banner and two of his last four fights have ended in decisions. Pessoa hasn’t been the most accurate striker through two UFC fights, but he has clear power in both hands and has a wild style where he’ll come forward and throw haymakers a little carelessly. Pessoa has powerful leg kicks as well and has shown to have above-average takedown defense. The issue for Pessoa is the strike accuracy and the ability to get sloppy at times that can lead to counters. This will be Pessoa’s first career fight in Abu Dhabi.

Any time you can get a knockout artist at plus money you have to consider it. Pessoa and more than double your money is worth consideration. However, Pessoa is also sloppy on his feet at times and his aggressiveness can be used against him on counterstrikes. Boser looked really good last month and has the speed / power combination to make Pessoa pay if he comes rushing in recklessly. Boser moves like a light heavyweight and that hand speed is going to be the difference here on the feet.

Give me Boser to win by knockout, so I’ll take him to win within the distance to shave down the ML price.