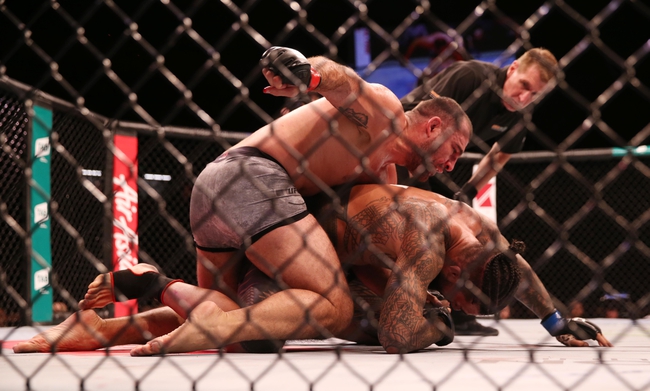 Mauricio Rua and Antonio Rogerio Nogueira fight Saturday during UFC on ESPN 14 at the Flash Forum.

Mauricio Rua enters this fight with a 26-11-1 record and has won 81 percent of his fights by knockout. Rua has won four of his last six fights and is coming off a November draw against Paul Craig. Rua is averaging 3.63 significant strikes per minute with an accuracy percentage of 50 percent. Rua is averaging 2.17 takedowns with an accuracy percentage of 48 percent. Roa is coming off a draw at UFC Fight Night 164 where he opponent was far more accurate with his strikes and landed pretty much double the amount of total strikes. Rua probably should have been on the losing side of that bout, which would have given him five losses in his last 10 bouts. Rua is an aggressive fighter who has very heavy hands, uses his legs well and has seen 21 of his 26 victories end in knockouts. Rua is a black belt in Muay Thai and BJJ, and he’s now training in boxing and wrestling. Rua obviously does his best work standing up, but he’s also a solid takedown artist as well and can work his way back to his feet. Rua has a successful ground and pound, and he has a high gas tank to be effective with six of his last eight bouts seeing the third round. This will be Rua’s first career fight in Abu Dhabi.

Antonio Rogerio Nogueira enters this fight with a 23-9 record and has won 39 percent of his fights by decision. Nogueira has split his last 12 fights and is coming off a May (2019) loss to Ryan Spann. Nogueira is averaging 2.39 significant strikes per minute with an accuracy percentage of 34 percent. Nogueira is averaging 0.67 takedowns with an accuracy percentage of 44 percent. Nogueira was finished early at UFC 237, and we’ve now seen him get knocked out twice in his last three bouts. Nogueira has been outside of the octagon for well over a year now, and he’s 44 years old, so it’s going to be interesting to see what he has left in the tank at this point. Nogueira comes from a boxing background and is a third degree black belt in BJJ, so while the power has taken a hit in age, he’s a balanced fighter who is comfortable wherever the bout goes. Nogueira is a crafty southpaw on his feet and has seen it all on the canvas while producing six submission victories. The issue is we’ve seen Nogueira get knocked out in three of his last six fights, so there’s questions about how much he really has left. This will be Nogueira’s first career fight in Abu Dhabi.

This will be the third time these two fight, as Rua won a 2005 PRIDE bout in unanimous decision and did the same in 2015 at UFC 190. Both of these fighters are obviously way past their prime and you can argue neither should be in the octagon at this stage, especially during a pandemic when both of them are getting up there in age. The difference for me is that Rua has been in the octagon far more recently and probably has a bit more left in the tank. Nogueira is now 44 years old and has been stopped a lot in recent bouts.

Not the sexiest fight in the world, but Rua should improve to 3-0 against Nogueira.