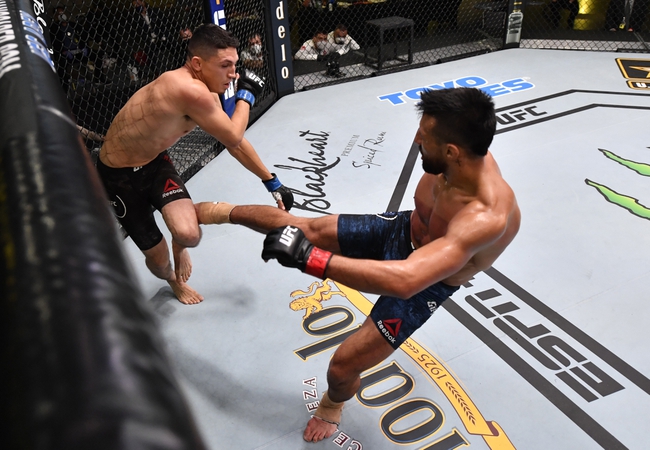 Chris Gutierrez enters this fight with a 15-4-1 record and has won 46 percent of his fights by knockout. Gutierrez has won six of his last seven fights and is coming off a May win over Vince Morales. Gutierrez is averaging 4.17 significant strikes per minute with an accuracy percentage of 57 percent. Gutierrez is averaging 0.31 takedowns with an accuracy percentage of 33 percent. Gutierrez improved to 3-1 under the UFC banner with a knockout win at UFC on ESPN 9 in his featherweight debut. Gutierrez has now won three straight fights and two of his last five victories have come by knockout via leg kicks. Gutierrez is a purple belt in BJJ and has proven over his last few fights that he’s an effective striker o the feet and delivers  strong leg kicks. Gutierrez also has a solid gas tank and it’s helped him win seven of his 10 career decisions. Gutierrez has never been knocked out in his career. This will be Gutierrez’s third career fight in Las Vegas.

Cody Durden enters this fight with a 11-2 record and has won 45 percent of his fights by knockout. Durden has won seven straight fights and is coming off a July win over John Sweeney. Durden will make his UFC debut, and he’ll do it on a quick turnaround, as he just fought a couple of weeks ago in the NFC. There’s not a lot of productive film out there on Durden, but he has finished 10 of 11 victories and is coming off a first round knockout. Durden appears to have decent wrestling and clearly has some pop in his hands to produce five knockouts, but it’s hard to get a real feel for his game when you consider the limited film and the fact almost all of the names on his resume are inexperienced fighters. We’re going to learn a lot more about Durden when he takes the octagon on Saturday night. This will be Durden’s first career fight in Las Vegas.

The truth is nobody knows much about Durden, as he’s fought his whole career in small promotions against inexperience fighters. Now, he’s fighting an MMA veteran two weeks after fighting in the National Fighting Championship. This feels like Durden is biting off a little more than he can chew right now. Gutierrez is somebody who seems to be getting better each time he enters the cage, and he has a major advantage of already fighting in the smaller UFC APEX.

I’ll side with Gutierrez in a decision victory.