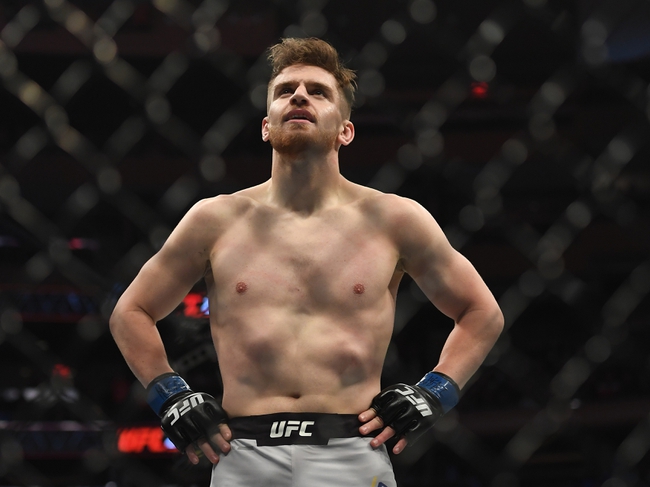 Derek Brunson enters this fight with a 20-7 record and has won 55 percent of his fights by knockout. Brunson has split his last eight fights and is coming off an August (2019) win over Ian Heinisch. Brunson is averaging 3.39 significant strikes per minute with an accuracy percentage of 45 percent. Brunson is averaging 2.80 takedowns with an accuracy percentage of 29 percent. Brunson is coming off a dominant decision win at UFC 241 where he landed 102 total strikes and produced two takedowns. Brunson has won back-to-back decision bouts since his loss to Israel Adesanya and looks for three straight wins for the first time since 2015-16. Brunson is an explosive fighter with obvious knockout power and has a tricky southpaw stance with a boxing background. Brunson was also a Division II wrestler and is a brown belt in BJJ, so he knows his way around the canvas and has become much more confident with his takedown attempts. Brunson wants to be the aggressor who controls the pace, and he can struggle when he’s not able to the dictate the bout. This will be Brunson’s fourth career fight in Las Vegas.

Edmen Shahbazyan enters this fight with a 11-0 record and has won 82 percent of his fights by knockout. This will be Shahbazyan’s fourth fight since 2019, and he’s coming off a November win over Brad Tavares. Shahbazyan is averaging 4.11 significant strikes per minute with an accuracy percentage of 52 percent. Shahbazyan is averaging 6.77 takedowns with an accuracy percentage of 40 percent. Shahbazyan is coming off an impressive first round knockout at UFC 244 where he landed a head kick and knocked the lights out. Shahbazyan was in control of that fight up to that point, and he’s taken just four total strikes in his last three fights combined. Shahbazyan has been nothing but dominant on the UFC level and 10 of his 11 victories have been finishes in the first round. Shahbazyan is a high level standup striker with clear knockout power and terrific head movement. Shahbazyan has a strong ground and pound, and he showed in his last bout that he’ll mix his legs in his attack as well. While Shahbazyan hasn’t shown a ton of ground work in his short MMA career, he does have good scrambling skills and has one submission victory via rear-naked choke. This will be Shahbazyan’s fifth career fight in Las Vegas.

This line is showing no love to Brunson, a fighter with true knockout power and somebody who can push the pace and end things quickly. Then again, I understand the line because Brunson runs hot and cold, and he’s also somebody who is a bit careless on the feet. Brunson rushes in far too often and has a habit of leaving his chin in the air when throwing. Brunson makes those little mistakes against Shahbazyan and he’s going to be snoring in the octagon.

I’m going to side with Shahbazyan, and I’m going to pick him to win inside distance to lower the price of the ML.