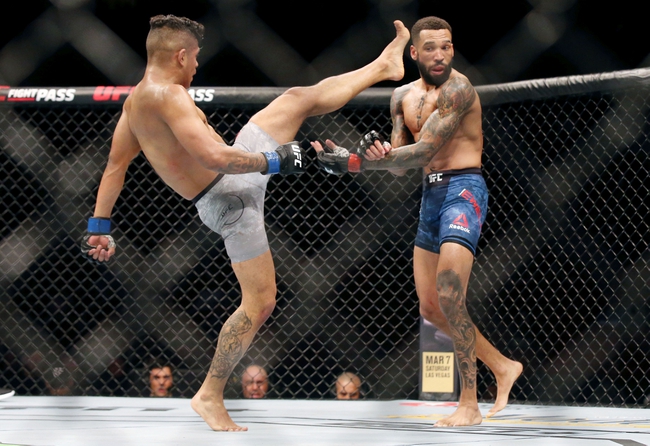 Frankie Saenz enters this fight with a 12-6 record and has won 58 percent of his fights by decision. Saenz has split his last eight fights and is coming off a March (2019) loss to Marlon Vera. Saenz is averaging 3.97 significant strikes per minute with an accuracy percentage of 46 percent. Saenz is averaging 1.77 takedowns with an accuracy percentage of 32 percent. Saenz is coming off a first round knockout loss at UFC Fight Night 148 and will fight for just the third time since December of 2017. At almost 40 years old, Saenz is in need of a victory considering he’s lost four of his last six fights. Saenz comes from a wrestling background and is a blue belt in BJJ, and he’s seen seven of his last nine fights end in decisions. Saenz is most comfortable in the clinch or on the canvas where he can control the pace of the fight and sneak in some body shots and mix in hard knees. Saenz has never been submitted in his career despite six career losses. This will be Saenz’s third career fight in Las Vegas.

Jonathan Martinez enters this fight with a 11-3 record and has won 55 percent of his fights by knockout. Martinez has won seven of his last 10 fights and is coming off a February loss to Andre Ewell. Martinez is averaging 3.67 significant strikes per minute with an accuracy percentage of 47 percent. Martinez is averaging 0.51 takedowns with an accuracy percentage of 28 percent. Martinez is coming off a tough split decision loss at UFC 247 where he landed less strikes but was one percent more accurate with his significant shots. Martinez hopes to avoid back-to-back losses for the first time in his career. Martinez is a sneaky athletic fighter who does his best work standing up, as he has power in his hands and throws elbows and flying knees out of nowhere. A bit unpredictable on his feet, Martinez started his pro career with five straight knockouts. Martinez also has some scrambling ability on the canvas and entered the UFC producing back-to-back armbar finishes, so he has some balance to his attack. This will be Martinez’s first career fight in Las Vegas.

Saenz hasn’t fought in over a year, and he’s an aging fighter who doesn’t have the finish ability any more and really doesn’t want to mix it up offensively. Martinez has the power and raw striking ability to end things on the feet at any moment, but he also has an underrated ground game and will find a submission hold if given the chance. Martinez should win this fight, I’d predict him to do it with a finish to lower the ML price.