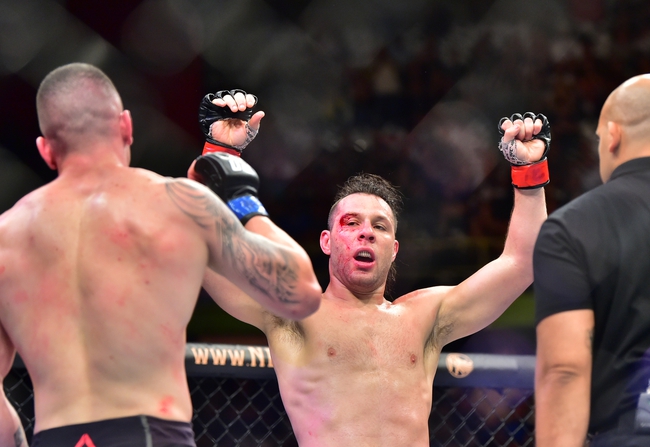 Eric Spicely enters this fight with a 12-5 record and has won 50 percent of his fights by submission. Spicely has split his last 10 fights and is coming off a June (2019) loss to Deron Winn. Spicely is averaging 3.71 significant strikes per minute with an accuracy percentage of 45 percent. Spicely is averaging 1.31 takedowns with an accuracy percentage of 20 percent. Spicely is coming off a decision loss at UFC Fight Night 154 that earned fight of the night honors. Spicely ate 171 total strikes in the bout but was two percent sharper with his significant strikes. Spicely has now lost four straight UFC fights and could use a win here to improve his chances of more work. Spicely comes from a wrestling background and is a black belt in BJJ. Spicely is a presser fighter who continues to come forward and be the aggressor, and his last two wins have ben knockouts. Spicely is most comfortable in the clinch and has six career submission victories. This will be Spicely’s second career fight in Las Vegas.

Markus Perez enters this fight with a 12-3 record and has won 50 percent of his fights by submission. Perez has split his last six fights and is coming off a November loss to Wellington Turman. Perez is averaging 2.75 significant strikes per minute with an accuracy percentage of 48 percent. Perez is averaging 1.08 takedowns with an accuracy percentage of 26 percent. Perez is coming off a decision loss at UFC Fight Night 164, a fight where he was far more accurate with the strikes but was taken down twice. Perez now looks to avoid back-to-back losses for the first time in his career. Perez grew up training Kung-Fu, and he’s a brown belt in BJJ and a black belt in Muay Thai. Perez is an accurate striker on his feet and loves mixing in leg kicks and has a solid ground and pound. Perez can also be a bit unpredictable on his feet and has a nasty spinning back elbow knockout victory. Perez has six career submission victories with two of them coming via the arm-triangle choke. This will be Perez’s first career fight in Las Vegas.

Spicely has lost four straight fights in the UFC and is 2-6 in the UFC for his career. There’s not a whole lot Spicely does well and it’s hard to back him in his current form. Perez is much sharper on the feet and has the grappling skills if Spicely wants to slow things down in the clinch.

A really blah fight, but Perez is far more talented and should find a way to win via decision.