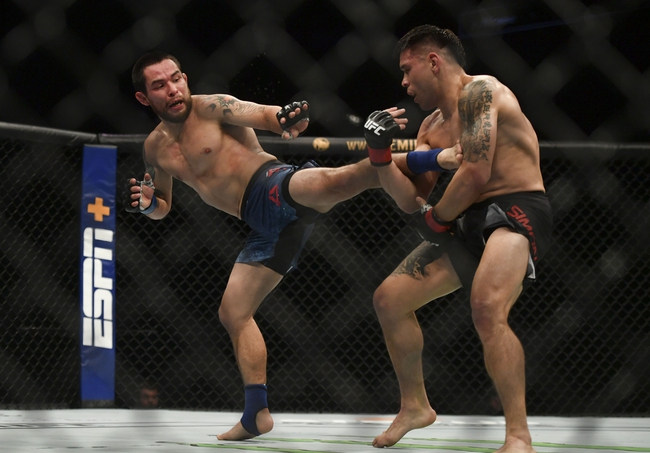 Ray Borg enters this fight with a 13-5 record and is winning 46 percent of his fights by submission. Borg has split his last eight fights and is coming off a May loss to Ricky Simon. Borg is averaging 1.52 significant strikes per minute with an accuracy percentage of 52 percent. Borg is averaging 3.89 takedowns with an accuracy percentage of 50 percent. Borg was just beat up for three rounds and while it was a split decision, the fight wasn’t all that close despite a late surge from the Tazmexican Devil. There’s not really a case to be made for Borg winning that fight, as he ate several big strikes and was taken down with ease in all three rounds. It’s going to be interesting to see how Borg improves just a couple months later, especially when he withdrew from UFC on ESPN 10 for personal reasons. Borg is a smooth fighter who is stronger than he looks and usually gets the fight on the ground where he wants it. Borg has a strong takedown percentage and he usually controls top position where he has an effective ground and pound. Borg scrambles well, can reverse position quickly and has six submission victories on his resume. However, Borg may be biting off a bit more than he can chew right now, as this will be his third fight since February and his previous two fights went the distance. This will be Borg’s fourth career fight in Las Vegas.

Nathan Maness enters this fight with a 11-1 record and is winning 45 percent of his fights by decision. Maness has won five of his last six fights and is coming off a February win over Kellen VanCamp. Maness will make his UFC debut after bouncing around his pro career and spending most of his fights in his home state of Kentucky. Maness is a lengthy fighter 5’10” and a 72 inch reach, and he has impressive power in his hands that have dropped many opponents with one shot. Maness is really scary when he’s able to sit back and pick his shots on the feet, and he’ll do the same on the canvas with his ground and pound. Maness also has a couple of submission victories, which includes a brabo choke three years ago. This will be Maness’ first career fight in Las Vegas.

Maness is a live dog in this fight when you consider the power he has in his hands and the fact he has a nine inch reach advantage in this fight. Borg is going to have to go through some traffic to get his hands on Maness. And with all that said, I still have to side with Borg in this fight. Maness hasn’t fought a lot of tough competition up to this point, and he’s running into an experienced fighter who can take a shot and keep coming forward, and he has the grappling advantage. Maness can’t do anything with Borg on the canvas in this fight.

The price isn’t cheap, but Borg is a solid bet here and may be worth throwing in a potential parlay with another fight you like.