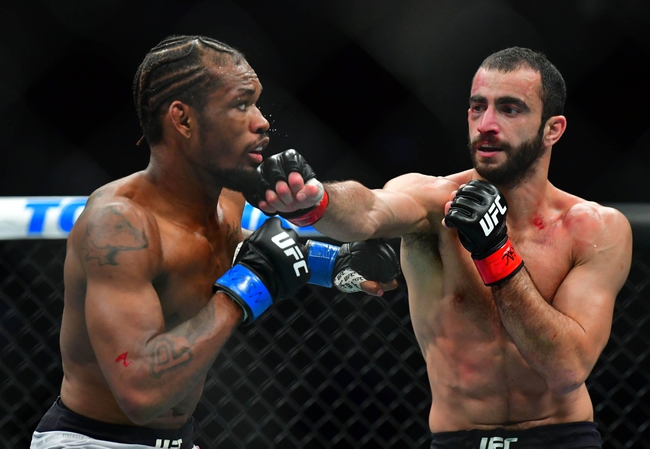 Jamall Emmers enters this fight with a 17-5 record and has won 41 percent of his fights by knockout. Emmers has won six of his last eight fights and is coming off a March loss to Giga Chikadze. Emmers is averaging 4.96 significant strikes per minute with an accuracy percentage of 52 percent. Emmers is averaging 1.42 takedowns with an accuracy percentage of 33 percent. Emmers lost his UFC debut at UFC 248 despite landing more strikes than his opponent, being far more accurate and producing pair of takedowns. Emmers now hopes to avoid back-to-back losses for the first time in his career. Emmers has some pop to his standup and has above average boxing skills, but he’s also shy at times when it comes to letting his hands go. You want to see Emmers be the aggressor more often and kind of force the issue offensively when chances present themselves. This will be Emmers’ second career fight in Las Vegas.

Timur Valiev enters this fight with a 16-2 record and has won 56 percent of his fights by decision. Martinez has won his last six fights and is coming off a December win over Taigro Costa. Valiev will make his widely anticipated UFC debut after coming over from Gorilla Fighting. Valiev has bounced around from bantamweight and featherweight throughout his career and many have questioned why he wasn’t in the UFC a lot sooner. Valiev trained early in Wushu, and he has a background in kickboxing, boxing and is a brown belt in BJJ. Valiev is a high level striker on the feet with extremely quick hands, and he’s sometimes a bit too aggressive due to his confidence, and that can open the door for some counters. Valiev is also a proven grappler and has a pair of submission victories for his career. There’s not much that Valiev doesn’t do well and he’s easily one of the better prospects the UFC has picked up in the last few years. This will be Valiev’s second career fight in Las Vegas.

Emmers is the bigger fighter and has the pop to make Valiev pay on the feet if he opens himself up too much. Outside of that, there’s no way I can pick against Valiev in this fight, as he’s the more balanced and polished fighter, and he’d have a clear edge if this fight goes to the canvas. Valiev has oodles of potential and he’s somebody who could climb up the rankings rather quickly.

You should be buying stock in Valiev now before it’s too late.