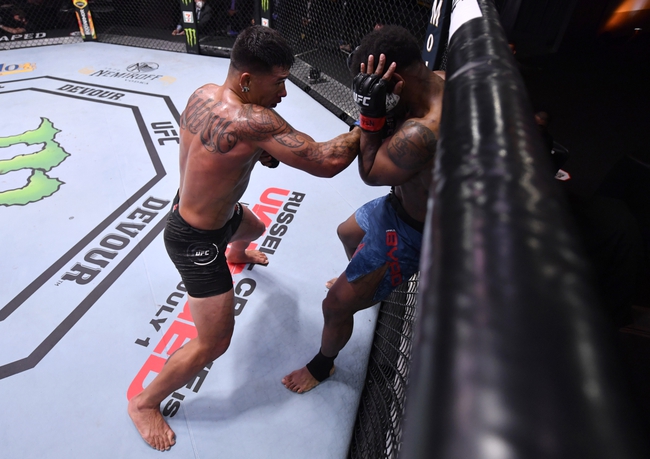 Darren Stewart enters this fight with a 11-5-1 record and has won 64 percent of his fights by knockout. Stewart has won four of his last six fights and is coming off a March loss to Bartosz Fabinski. Stewart is averaging 2.94 significant strikes per minute with an accuracy percentage of 44 percent. Stewart is averaging 1.38 takedowns with an accuracy percentage of 44 percent. Stewart is coming off a decision loss at Cage Warriors 113 where he was a -186 favorite and the headliner at the BEC Arena. Stewart has won four of his last five UFC fights and has seen each of his last four bouts overall go to the judges. Stewart is a violent fighter who simply unloads on his opponent no matter where the fight goes. Whether Stewart is throwing haymakers on his feet or attempting tackle style takedowns to position a ground and pound, you can tell The Dentist is out to hurt his competition. There’s little feeling things out or using a jab to set up combinations, Stewart unloads in everything he throws. The downside is that Stewart can be a bit wild in the octagon and it leaves opening for counters, but the 29-year-old is going to take his chances, and if he connects with something, he has the ability to finish things quickly. This will be Stewart’s second career fight in Las Vegas.

Maki Pitolo enters this fight with a 13-5 record and has won 54 percent of his fights by knockout. Pitolo has won four of his last five fights and is coming off a June win over Charles Byrd. Pitolo is averaging 5.22 significant strikes per minute with an accuracy percentage of 45 percent. Pitolo is averaging 1.98 takedowns with an accuracy percentage of 60 percent. Pitolo got his first UFC victory at UFC 250 where he produced a second round knockout, a fight he was dominating up to that point anyway. Pitolo has now produced knockouts in five of his last seven victories overall. Pitolo clearly comes from a boxing background, as he has a come forward style and throws combination after combination until he overwhelms his  opponent. Ground and pound, hooks to body and a strong jab, Pitolo is nice with his hands and has seven career knockouts. Pitolo has also shown some takedown success in two UFC fights, and he had a submission victory at Bellator 213, so there’s some balance to his attack. Still, Pitolo butters his bread with his standup and letting his hands go.

This could be the fight of the night, as we have two strong strikers who want a fight standing up and can end things at any moment. I expect a backyard brawl and blood in the octagon with this one. Stewart is the more proven fighter on the bigger stage, so it’s not a surprise to see him favored, but he was also dominated in his last bout in Cage Warriors and look gassed early in the fight.  Stewart can also be a bit sloppy when throwing punches, so I’m worried about counterstrikes here. Pitolo is a little more technical to his attack, and he also has success with the takedowns, something Stewart isn’t very comfortable defending.

There’s a lot of value with Pitolo and the plus money.