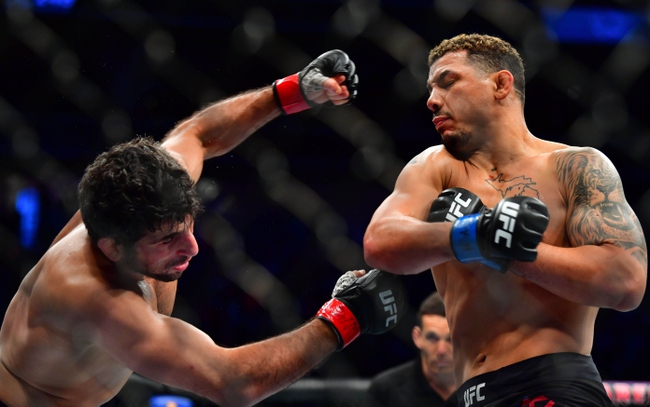 Beneil Dariush enters this fight with a 18-4-1 record and has won 44 percent of his fights by submission. Dariush has won each of his last four fights and is coming off a March win over Drakkar Klose. Dariush is averaging 3.87 significant strikes per minute with an accuracy percentage of 49 percent. Dariush is averaging 1.80 takedowns with an accuracy percentage of 33 percent. Dariush is coming off an impressive second round knockout at UFC 248 where he landed a clean left hand and put his opponent to sleep. The fight earned performance of the night honors, the third straight fight Dariush has received such a bonus. Dariush will now fight for the third time since October of last year. Dariush is a black belt in Brazilian Jiu-Jitsu and a black belt in Muay Thai, so he’s pretty much comfortable wherever the fight goes. Dariush has a nasty submission game and has only lost once on the canvas. Dariush also has an impressive gas tank and has won all six of his career decisions. Dariush has a decent standup and uses his legs very well, but he can leave himself open on his feet, and it’s led to him getting knocked out in three of his four carer losses. Even in his last bout, Dariush was willing to trade before landing the big blow. This will be Dariush’s fourth career fight in Las Vegas.

Scott Holtzman enters this fight with a 14-3 record and has won 50 percent of his fights by decision. Holtzman has won five of his last six fights and is coming off a February win over Jim Miller. Holtzman is averaging 4.52 significant strikes per minute with an accuracy percentage of 49 percent. Holtzman is averaging 2.23 takedowns with an accuracy percentage of 60 percent. Holtzman is coming off a decision win at UFC Fight Night 167 that earns fight of the night honors. In the victory, Holtzman landed 120 total strikes and produced a takedown. Holtzman has now won seven of his 10 career decisions, and he’s 7-3 under the UFC banner. Holtzman is a bouncy, athletic fighter who mixes in leg kicks well, is solid defensively in his stance and is a brown belt in BJJ. Holtzman is going to get his shots in without getting hit a ton, and he’s defended takedowns at a high level in the UFC. A technically sound fighter who picks his spots, Holtzman makes his opponents earn everything in the octagon. Holtzman has never been finished in his career. This will be Holtzman’s third career fight in Las Vegas.

Holtzman is going to have his chances in this fight because of the aggressive style Dariush brings to the octagon and his habit of willing to trade with his opponents. Even in his last fight, Dariush ate some big shots and kept coming forward to put the fight away. It’s a risky tactic and it’s always concerning when backing a fighter like Dariush. Still, I’m going with Dariush to win this fight, as he has the power edge to put things away, inexperienced enough to check the leg kicks of Holtzman and has the advantage on the ground if it ends up there. Dariush knows how to finish fights and that’s what gives him the advantage.

Dariush gives us his second victory in 2020.