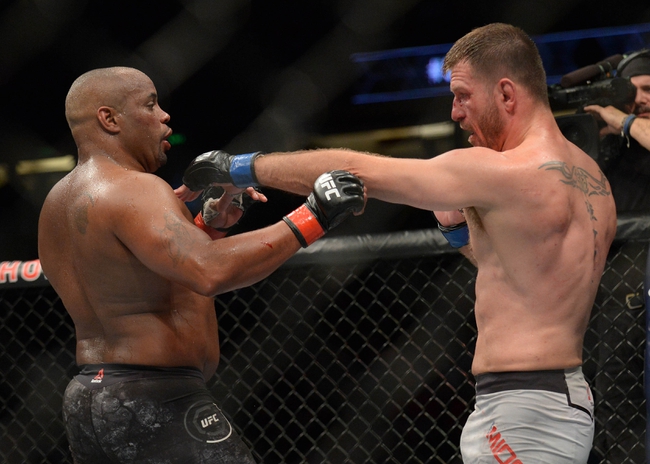 Stipe Miocic and Daniel Cormier fight Saturday during UFC 252 at the UFC APEX.

Stipe Miocic enters this fight with a 19-3 record and has won 79 percent of his fights by knockout. Miocic has won seven of his last eight fights and is coming off an August (2019) win over Cormier. Miocic is averaging 4.95 significant strikes per minute with an accuracy percentage of 52 percent. Miocic is averaging 2.20 takedowns with an accuracy percentage of 37 percent. Miocic is coming off a fourth round knockout that won him the UFC Heavyweight Championship and earned him performance of the night honors at UFC 241. Miocic was likely losing the fight on the scorecards up to that point, as he ate 230 total strikes and was taken down once. Miocic now looks to successfully defend the belt for the fourth time in his career. Miocic has proven he’s a striking machine who lands volume punches with great accuracy and overwhelming power, and he’s now seen knockouts in seven of his last eight victories. Five of those knockouts have ended in the first round. Miocic is also a polished wrestler with a D1 background, but none of his fights have ended in submission. Miocic usually wastes no time throwing strikes and his head movement is a really underrated part of his standup as well. Miocic can hold his own on the ground when needed, but his stand up is what’s made him a star and one of the scariest fighters on the UFC roster overall. This will be Miocic’s fourth career fight in Las Vegas.

Daniel Cormier enters this fight with a 22-2 record and has won 45 percent of his fights by knockout. Cormier has won seven of his last nine fights and is coming off an August (2019) loss to Miocic. Cormier is averaging 4.25 significant strikes per minute with an accuracy percentage of 52 percent. Cormier is averaging 1.95 takedowns with an accuracy percentage of 44 percent. Cormier has to be a little disappointed in himself knowing he was likely up on the cards before getting knocked out, as he was the aggressor throughout the fight and far more accurate with the significant strikes. Cormier now hopes to avoid back-to-back losses for the first time in his career. Cormier has established himself as one of the toughest fighters in the sport, as few can wrestle with him on the canvas, and four of his last eight victories have come by the rear-naked choke. A brown belt in BJJ and a highly decorated freestyle wrestling background, Cormier always feels like he has the advantage if he can execute a takedown, and he seems to get better the longer the fight drags out. Cormier is a well conditioned fighter who is built for the long haul, and even at 41 years old, he still has some pop in those hands that can end things standing up. Cormier does have 10 knockout victories, so he’s far and away more than a ground fighter. Cormier is simply one of the more balanced and best MMA fighters to ever step into the octagon and he’s proving age truly is nothing more than a number. This will be Cormier’s seventh career fight in Las Vegas.

This is an interesting fight, as Cormier was a massive underdog in the first bout and won, and then he lost the second bout as a big favorite. Basically, the underdog has won the first two fights. On the flip side, Cormier won the first bout by knockout and was also winning the second fight before he was knocked out. You can argue Cormier was in control of both bouts and that’s enough to lean you in that direction. However, I picked Miocic in the second match and am doing the same here. Cormier has a habit of waiting too long to get into a rhythm and feel things out, and that gives Miocic a chance to push the pace and make his opponent uncomfortable. Miocic is also younger and more agile on the feet, while he also has the wrestling experience to counter Cormier if needed. We’re getting the younger, more powerful fighter at the cheaper price yet again.