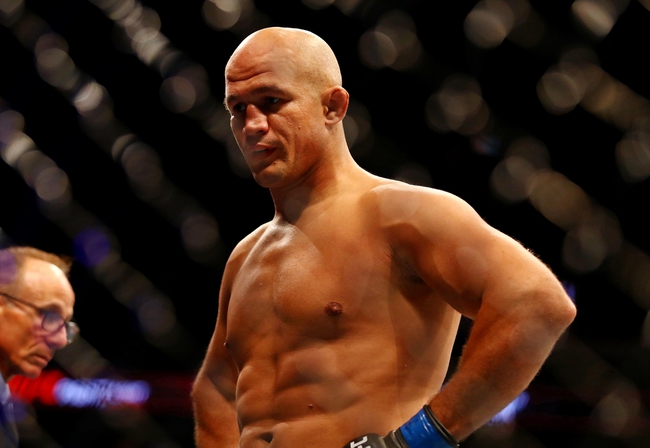 Junior dos Santos enters this fight with a 21-7 record and has won 71 percent of his fights by knockout. dos Santos has split his last 12 fights and is coming off a January loss to Curtis Blaydes. dos Santos is averaging 4.66 significant strikes per minute with an accuracy percentage of 48 percent. dos Santos is averaging 0.33 takedowns with an accuracy percentage of 55 percent. dos Santos is coming off a second round knockout loss at UFC Fight Night 166, and he’s now been finished in his last two fights. dos Santos has been knocked out in each of his last five losses, and he now look to avoid three straight losses for the first time in his career. dos Santos is one of the best boxers in the heavyweight division with terrific technique and still enough power for his opponent to respect. dos Santos also has more variety to his stand up, as he’ll mix in some spinning back kicks and isn’t afraid to work the body rather than head hunt for the quick finish. dos Santos is also a black belt in Brazilian Jiu-Jitsu, so his ground game can’t be overlooked, and he does have one career submission win, which came in his second pro fight 14 years ago. While many would say he’s past his prime now that he’s 36 years old, dos Santos is still one of the best to ever step in the octagon. This will be dos Santos’ fifth career fight in Las Vegas.

Jairzinho Rozenstruik enters this fight with a 10-1 record and has won 90 percent of his fights by knockout. Rozenstruik has won five of his last six fights and he’s coming off a May loss to Francis Ngannou. Rozenstruik is averaging 3.84 significant strikes per minute with an accuracy percentage of 48 percent. Rozenstruik is coming off his first career loss at UFC 249 that lasted just 20 seconds, as he was rushed with combinations and ate a clean shot from the scariest man on the planet. It’s going to be interesting to see how Rozenstruik bounces back from his first career loss, especially after that hype was starting to build after his win over Alistair Overeem. Rozenstruik is an intriguing fighter at 32 years old who comes from a boxing and kickboxing background, and he has obvious clear KO power in either hand. Rozenstruik likes his chances standing up, as he was highly successful at kickboxing with a 76-8 record, and he throws these hooks that can knock his opponents head off at any moment. Rozenstruik still needs to prove himself in the clinch and on the ground, but there’s no doubt the raw tools are there and the power gives him a punchers chance against anybody. This will be Rozenstruik’s first career fight in Las Vegas.

I can see why Rozenstruik is the favorite here, as he has the clear power advantage and is fighting an aging fighter who has been in some wars over his career and has a history of being knocked out. It’s all over for JDS if Rozenstruik lands anything remotely clean. However, dos Santos is head and shoulders the more balanced and experienced fighter, and he can take Rozenstruik out of his comfort zone by cutting off the distance and getting him in the clinch. That should be easier to do in the smaller cage. JDS has also seen everything under the sun and this isn’t the first time he’s fought somebody with scary power. Heck, we just saw dos Santos beat Derrick Lewis last year, so it’s not like he still can’t get the job done.

I really like dos Santos and the plus money here.