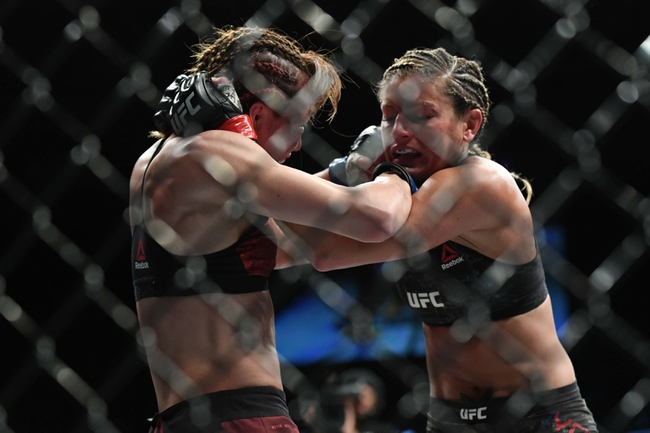 Ashley Yoder enters this fight with a 7-5 record and has won 57 percent of her fights by submission. Yoder has split her last eight fights and is coming off an October loss to Randa Markos. Yoder is averaging 3.10 significant strikes per minute with an accuracy percentage of 42 percent. Yoder is averaging 1.33 takedowns with an accuracy percentage of 38 percent. Yoder is coming off a split decision loss at UFC Fight Night 162 where she landed 82 total strikes and produced two takedowns. Yoder was far less accurate with her significant strikes in the losing effort, and she’s now just 2-4 under the UFC banner. Yoder is a brown belt in BJJ, and she comes from a wrestling and kickboxing background. Yoder has good scrambling skills, can change positions quickly and all four of her submission victories have come via armbar. Yoder can land a shot or two standing up, but she’s far more comfortable on the canvas where she can kind of muck things up. Yoder has seen all 12 of her fights end in either submission or decision. This will be Yoder’s third career fight in Las Vegas.

Livia Renata Souza enters this fight with a 13-2 record and has won 62 percent of her fights by submission. Souza has won six of her last eight fights and is coming off a July (2019) loss to Brianna Van Buren. Souza is averaging 1.79 significant strikes per minute with an accuracy percentage of 37 percent. Souza is averaging 3.35 takedowns with an accuracy percentage of 50 percent. Souza is coming off a decision loss at UFC Fight Night 155 where she landed 30 total strikes and produced two takedowns. It’s been over a year since we’ve seen Souza in the octagon, as she’s been dealing with a back injury. Souza is a black belt in BJJ and somebody who is aggressive in the octagon with 10 finishes in 13 career wins. Souza isn’t as aggressive as she was years ago, but she does push the pace, throws power shots on the feet and is looking for takedowns often. Souza has eight carer submission victories and three of those have come via armbar. At 29 years old, Souza still has the potential to be one of the better fighters in this division and make a name for herself in the rankings. This will be Souza’s first career fight in Las Vegas.

It’s been a while since we’ve seen Souza in the octagon, but she’s still the better, more balanced fighter in this spot. Yoder can be a little too passive with her attack and play things a little too safe. Souza will be the aggressor in this bout from the start and is more than capable of finishing things on the feet or on the canvas. Souza is a talented fighter who has a chance to make some nice in this division if she can start putting together some wins. That starts here.

I’ll bite the bullet and lay the juice with Souza.