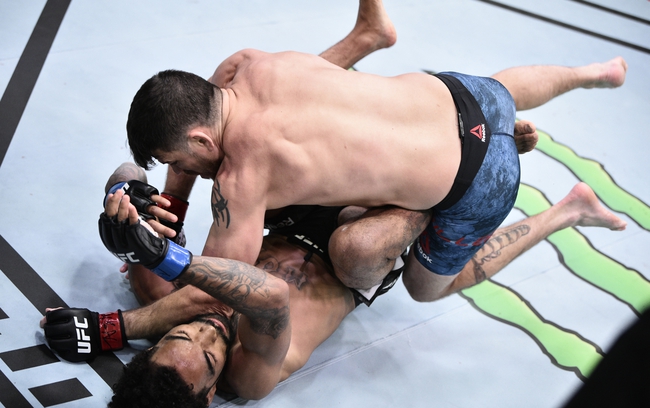 Jim Miller and Vinc Pichel fight Saturday during UFC 252 at the UFC APEX.

Jim Miller enters this fight with a 32-14-1 record and has won 56 percent of his fights by submission. Miller has won four of his last six fights and is coming off a June win over Roosevelt Roberts. Miller is averaging 2.81 significant strikes per minute with an accuracy percentage of 40 percent. Miller is averaging 1.68 takedowns with an accuracy percentage of 41 percent. Miller is coming off a first round submission win at UFC on ESPN 11, a fight where only 16 tool strikes were landed. Miller earned performance of the night honors in the victory and will now fight for the third time this year. At almost 37 years old, it’s going to be impressive if Miller can get the job done yet again. Miller is most known for his cardio and wrestling, as he simply wears on his opponent and does most of his damage on the ground. Out of 32 career wins for Miller, 28 of them have come by either submission or decision, and he’s only been submitted three times in his career. Miller is simply at his best when in the clinch or on the ground, and each of his last four wins have ended in submission. This will be Miller’s ninth career fight in Las Vegas.

Vinc Pichel enters this fight with a 12-2 record and has won 67 percent of his fights by knockout. Pichel has won five of his last six fights and is coming off a June (2019) win over Roosevelt Roberts. Pichel is averaging 3.29 significant strikes per minute with an accuracy percentage of 45 percent. Pichel is averaging four takedowns with an accuracy percentage of 60 percent. Pichel is coming off a decision win at UFC on ESPN 3 where he landed 81 total strikes and produced three takedowns. Pichel hasn’t fought in over a year due to hip surgery, so it’s going to be interesting to see what type of shape the 37-year-old is in. Pichel is a crafty fighter who is a striker at heart, mixes in his kicks well and usually closes the distance where he can land knees and produce a takedown. Pichel has had great success with takedowns on the UFC level, but he has yet to win a fight by submission and usually turns to ground and pound once on the canvas. Pichel also has shown in the past to have one-punch knockout potential, so he’s just as dangerous on his feet. Pichel is a brown belt in BJJ and an orthodox striker. This will be Pichel’s third career fight in Las Vegas.

I usually shy away from fighters who have been outside of the octagon for a while due to the unknown, and hip surgery won’t be easy for Pichel to return form, especially with him getting up there in age. Miller is a grizzly veteran who usually gets the fight where he wants it, and he looked great his last time out. A tough fighter who makes his opponent work for everything, Miller and the slight plus money is appealing in this spot.

I like Miller to win his second fight of the year.