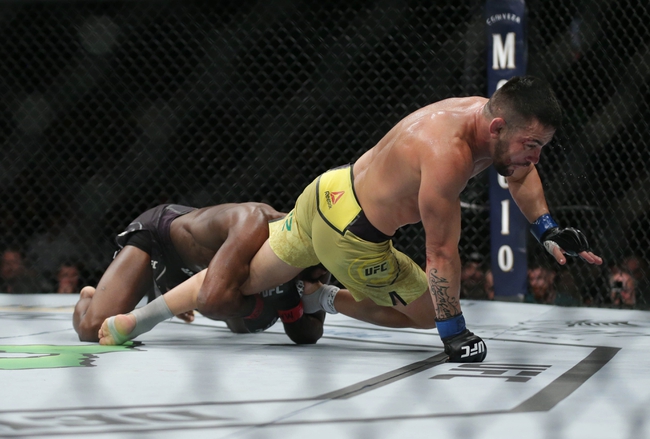 Pedro Munhoz and Frankie Edgar fight Saturday during UFC on ESPN 15 at the UFC APEX.

Pedro Munhoz enters this fight with a 18-4-1 record and has won 44 percent of his fights by submission. Munhoz has won six of his last eight fights and is coming off a June (2019) loss to Aljamain Sterling. Munhoz is averaging 5.29 significant strikes per minute with an accuracy percentage of 42 percent. Munhoz is averaging 0.92 takedowns with an accuracy percentage of 21 percent. Munhoz is coming off a decision loss at UFC 238 where he ate 179 total shots and was far less accurate with his significant strikes. Munhoz will now fight for the first time in over a year, is fresh off a positive COVID test and looks to avoid back-to-back losses for the first time in his career. Munhoz is an aggressive volume striker who does his best work on his feet, and he uses a lot of his strikes to set up his takedowns. Munhoz comes from a kickboxing background and is a black belt in BJJ. Munhoz controls the octagon very well with his movement and doesn’t need much to find a submission hold. Six of Munhoz’s nine submission victories have come by the guillotine choke. Munhoz has also never been finished in his career, with all four losses coming by decision. This will be Munhoz’s seventh career fight in Las Vegas.

Frankie Edgar enters this fight with a 23-8-1 record and has won 52 percent of his fights by decision. Edgar has split his last eight fights and is coming off a December loss to Chan Sung Jung. Edgar is averaging 3.60 significant strikes per minute with an accuracy percentage of 40 percent. Edgar is averaging 2.34 takedowns with an accuracy percentage of 31 percent. Edgar didn’t look great at UFC Fight Night 165 where he was knocked out in the first round, and he’s now been on the losing side in three of his last four fights. As he approaches 39 years old, many are questioning exactly what Edgar has left in the tank and if he’s capable of still being a top quality fighter who can headline cards. I guess we’ll find out here, eh? Edgar is an aggressive takedown artist with a polished grappling attack and is well conditioned enough to outlast most opponents. With a wrestling and boxing background, as well as a black belt in BJJ, Edgar’s blanched attack allowed him to put together a legendary resume. Edgar is tough as nails and is the sort of fighter who will continue to stand in the pocket and trade if needed. Edgar has only been finished twice in eight career losses. A high volume fighter who has been in many wars over his career, Edgar is always willing to leave it all in the octagon. This will be Edgar’s 11th career fight in Las Vegas.

It’s always intriguing getting a proven fighter such as Edgar and massive plus money. In some ways Edgar is a legend in the sport and has seen everything, and getting over two times your money is sometimes worth the shot. However, Edgar hasn’t looked great his last times out and things usually don’t get better with guys who have been in wars. Munhoz has the power advantage here on the feet, and he has the submission game that can counter Edgar’s wrestling. It would be a pretty big upset to see Munhoz lose this fight.

Give me Munhoz in the victory, and I’ll take him to win inside distance to shave down an expensive ML price.