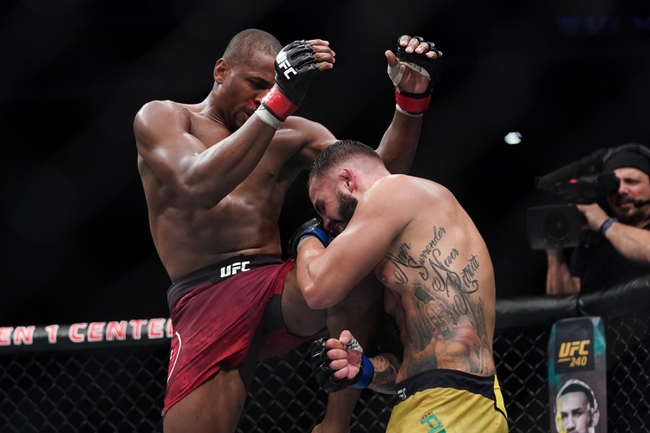 Marcin Prachnio and Mike Rodriguez fight Saturday during UFC on ESPN 15 at the UFC APEX.

Marcin Prachnio enters this fight with a 13-4 record and has won 77 percent of his fights by knockout. Prachnio has split his last two fights and is coming off a December (2018) loss to Magomed Ankalaev. Prachnio is averaging 2.39 significant strikes per minute with an accuracy percentage of 39 percent. Prachnio is averaging zero takedowns with an accuracy percentage of zero percent. Prachnio is coming off a first round knockout loss at UFC Fight Night 136 where he simply didn’t look good. Prachnio entered the UFC with a lot of hype coming from the One Championship, and he’s now 0-2 under the banner with both being first round knockout losses. It’s going to be interesting to see what we get from Prachnio here, especially with him being outside of the octagon for nearly two years. Prachnio is a strong Polish fighter with heavy hands and true knockout power, and four of his last five victories have been knockouts. Prachnio has one career submission, which came in his second pro fight, but he’s at his best standing up where he can let his hands go and display a come forward style. This will be Prachnio’s second career fight in the United States.

Mike Rodriguez enters this fight with a 10-4-1 record and has won 80 percent of his fights by knockout. Rodriguez has split his last six fights and is coming off a December loss to Da Un Jung. Rodriguez is averaging 4.30 significant strikes per minute with an accuracy percentage of 52 percent. Rodriguez is averaging zero takedowns with an accuracy percentage of zero percent. Rodriguez is coming off a first round knockout loss at UFC Fight Night 165 that drops him to 1-2-1 under the UFC banner. Needless to say, Rodriguez hasn’t fulfilled the hype since winning the Dana White's Contender Series 5 with a flying knee knockout. Rodriguez is a lengthy fighter with an 82.5 inch reach and is most comfortable on the feet. Rodriguez mixes in leg kicks well, is cautious defensively and works well behind his jab. Rodriguez has power when he wants to push the pace a bit and has produced eight knockout victories. All 10 of Rodriguez’s victories have been finishes, which includes a pair of submissions in CES MMA. Rodriguez is a blue belt in BJJ, so his ground game isn’t completely nonexistent. This will be Rodriguez’s second career fight in Las Vegas.

This is a strange fight to be on the main card, but I guess it’s expected a bit when we’re getting cards every week during a pandemic. You’ll take what you can get these days. These two fighters are pretty much fighting for their UFC lives at this point, as neither has looked great. The difference here is that Rodriguez has shown bright spots in his UFC career and has been in the octagon far recently. Prachnio hasn’t fought in nearly two years, and he’s shown us nothing on the UFC level, and he actually showed poor fight IQ in his last bout. Prachnio has also been knocked out in three of his four losses, which isn’t what you want to see when going up against a fighter in Rodriguez who has some pop.

This fight is rough to say the least, but Rodriguez should win it, and I’ll take him by knockout to lower the expensive ML price.