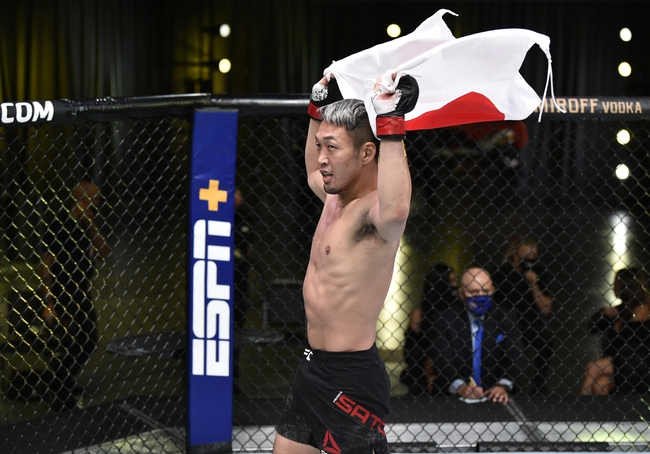 Daniel Rodriguez and Takashi Sato fight Saturday during UFC on ESPN 15 at the UFC APEX.

Daniel Rodriguez enters this fight with a 12-1 record and has won 50 percent of his fights by knockout. Rodriguez has won each of his last eight fights and is coming off a May win over Gabriel Green. Rodriguez is averaging 8.60 significant strikes per minute with an accuracy percentage of 48 percent. Rodriguez is averaging 1.94 takedowns with an accuracy percentage of 83 percent. Rodriguez is coming off a decision victory at UFC on ESPN 9 where he landed 175 total strikes and produced a takedown. Rodriguez is now 2-0 under the UFC banner and will be fighting for the third time this year. Rodriguez is a striker at heart who works behind his jab and has a powerful left hand. Rodriguez is most effective on his feet, but he can be a bit wild at times and has issues finding his range. Some would say Rodriguez is a bit raw still at this stage of his career, but he’s finding ways to win and finish fights, so we’re to the point where he shouldn’t be overlooked and a third win this year will really gain some attention. This will be Rodriguez’s third career fight in Las Vegas.

Takashi Sato enters this fight with a 16-3 record and has won 69 percent of his fights by knockout. Sato has won six of his last eight fights and is coming off a June win over Jason Witt. Sato is averaging 3.94 significant strikes per minute with an accuracy percentage of 41 percent. Sato is averaging 0.79 takedowns with an accuracy percentage of 50 percent. Sato is coming off a first round knockout victory at UFC on ESPN 12 where he was deadly accurate with his shots and dominated from start to finish. Sato is now 2-1 under the UFC banner and each of his last seven victories have ended in knockouts. Sato is a tricky southpaw with legit KO power in either hand and he has a black belt in Judo. Sato wants to control the pace from the beginning of the fight and throws everything with a purpose of ending the fight. Whether on the feet, in the clinch or on the ground, Sato is all power and has dropped many opponents with one shot. Sato is obviously a capable grappler and wrestler given his Judo background, but he’s made a name for himself in this sport with his power striking. This will be Sato’s second career fight in Las Vegas.

This has a chance to be the fight of the night with both guys being power strikers with great finish ability and pressure styles. No matter how it ends, it won’t be boring. While I guess Rodriguez should be the favorite based on what he’s done in his last couple of fights, we’re getting Sato at a wonderful price. Sato is probably the more well rounded fighter in this spot given his Judo history, and he’s nonstop pressure.

This fight could truly go either way, but I can’t turn down the plus money with a fighter as polished and powerful as Sato.