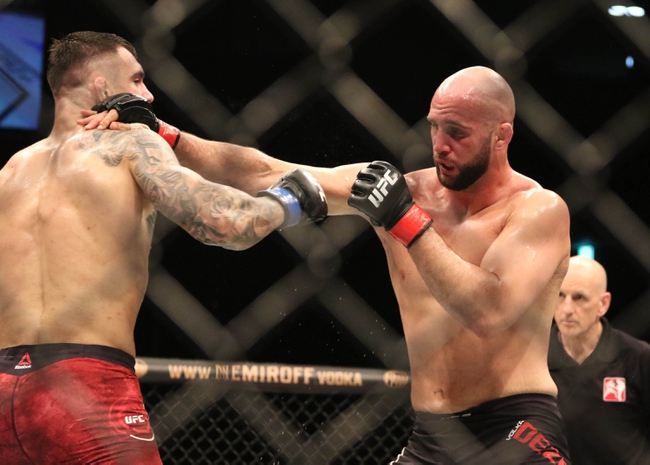 Anthony Smith enters this fight with a 33-15 record and has won 55 percent of his fights by knockout. Smith has won four of his last six fights and is coming off a May loss to Glover Teixeira. Smith is averaging 3.19 significant strikes per minute with an accuracy percentage of 46 percent. Smith is averaging 0.45 takedowns with an accuracy percentage of 27 percent. Smith is coming off a rough knockout loss at UFC Fight Night 171 where he ate 202 total strikes and was allowed to keep fighting much longer than he should have. Smith was getting beat up and even complained that his teeth were falling out, and he took extra punishment. It will be interesting to see how Smith responds from the loss, and he hasn’t lost back-to-back fights in seven years. Besides his toughness and ability to take a punch, Smith is an athletic striker who is creative on his feet and has true one-punch knockout power. Smith is highly effective with his legs and knees, and he’s comfortable on the canvas where he has 12 career submission victories. A black belt in BJJ and with his striking ability, Smith is one of the more balanced and tough minded fighters in this division. This will be Smith’s sixth career fight in Las Vegas.

Aleksandar Rakic enters this fight with a 12-1 record and has won 75 percent of his fights by knockout. Rakic has won five of his last six fights and is coming off a December loss to Volkan Oezdemir. Rakic is averaging 5.17 significant strikes per minute with an accuracy percentage of 52 percent. Rakic is averaging 1.20 takedowns with an accuracy percentage of 28 percent. Rakic watched his 12-fight winning streak come to an end in a split decision at UFC Fight Night 165 where he ate 118 total strikes. Rakic was far more accurate with his significant shots and even had a takedown, but it clearly wasn’t enough for the judges. Rakic now looks to avoid back-to-back losses for the first time in his career. Rakic is a technical fighter with a background in boxing and kickboxing, and he’s very smart on his feet to where he doesn’t take a lot of damage. Rakic is an accurate striker who picks his spots well and he’s quite quick with his hands for somebody who is so lengthy at 6’4” and has a 78-inch reach. Rakic has also improved his grappling skills over the years and has displayed a highly effective ground and pound throughout his first five fights in the UFC. This will be Rakic’s first career fight in the United States.

Smith is such a tough fighter and has proven us wrong in the past, so getting two times your money with him is intriguing. The issue I have is that it wasn’t that long ago when Smith was getting beat up by Teixeira and handing his teeth to the referee. I’m not thrilled about him jumping into the octagon just a few months later. Rakic is a power striker, mixes in his kicks well and his conditioning is next level. This feels like bad timing and a bad opponent to return to after what happened in his last bout.

Give me Rakic by knockout.