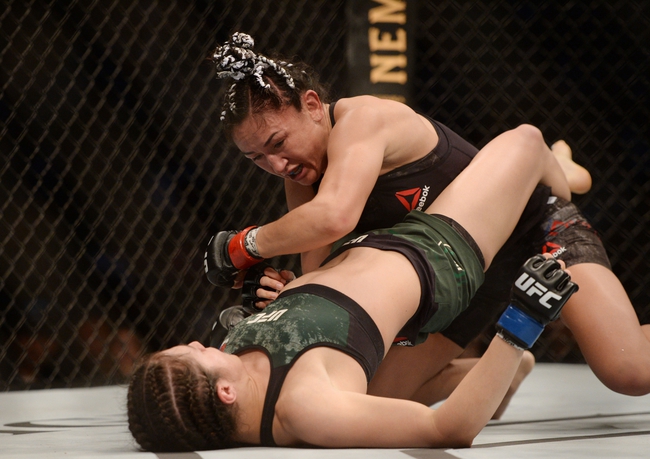 Alexa Grasso enters this fight with a 11-3 record and has won 64 percent of her fights by decision. Grasso has split her last six fights and is coming off a September loss to Carla Esparza. Grasso is averaging 5.25 significant strikes per minute with an accuracy percentage of 41 percent. Grasso is averaging 0.19 takedowns with an accuracy percentage of 33 percent. Grasso is coming off a decision loss at UFC Fight Night 159 that earned fight of the night honors. Grasso landed 103 total strikes in the fight, but she was far less accurate with her significant shots and was taken down four times. Grasso now hopes to avoid back-to-back losses for the first time in her career. Grasso is a standup striker at heart with a boxing background, terrific accuracy, technique and toughness. Grasso does a great job of standing in the middle of the octagon and landing strikes repeatedly often without allowing her opponent to counter. From a pure boxing standpoint, Grasso is up there as one of the best on the women’s side. The challenge for Grasso is to tap into the other areas of her game and improve in the clinch and on the canvas. A purple belt in BJJ, we’ve seen Grasso struggle in her past few fights in the clinch, and she’s coming off a bout where she was taken down multiple times. This will be Grasso’s first career fight in Las Vegas.

Ji Yeon Kim enters this fight with a 9-2 record and has won 44 percent of her fights by decision. Kim has won six of her last eight fights and is coming off an October win over Nadia Kassem. Kim is averaging 4.49 significant strikes per minute with an accuracy percentage of 33 percent. Kim is averaging zero takedowns with an accuracy percentage of zero percent. Kim is coming off a second round knockout at UFC 243 with a punch to the body, a fight she was in control of up to that point. Kim is now 3-2 under the UFC banner, but she’s missed weight in back-to-back fights. Kim is a highly decorated fighter with a purple belt in BJJ, and black belts in Hapkido and Wushu. Kim is fast with her hands and has some power to her shots with two career knockouts, and she throws heavy knees in the clinch. Kim could be better with her takedown defense, but she scrambles well and hasn’t gotten caught out of position yet. At nearly 31 years old, Kim could use a win here to kind of take her career to the next level. Kim has never been finished in her career despite two career losses. This will be Kim’s second career fight in Las Vegas.

Kim has enough standup striking to give her a shot in this fight and she actually has a six-inch reach advantage. However, Kim is a fighter who still has a bit more to prove on the bigger stage against increased competition, and she’s running into a proven fighter who is aggressive from the gate and far more polished. Grasso is the more accurate and busier fighter of the two, and I trust her in the clinch more as well.

Neither has relentless power, so I expect this to go to a decision, so taking Grasso by decision would certainly give us a cheaper price than the ML.