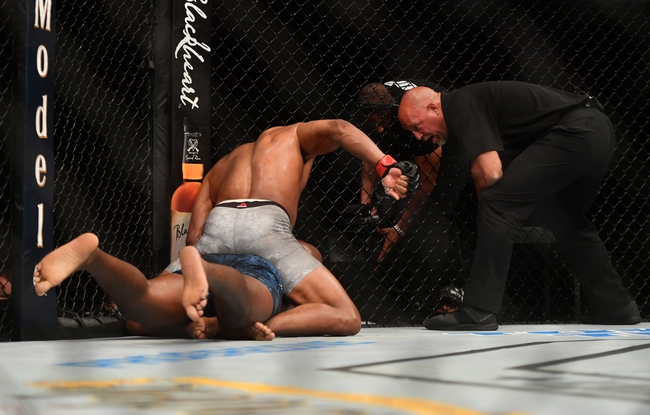 Alistair Overeem enters this fight with a 46-18 record and has won 52 percent of his fights by knockout. Overeem has split his last six fights and is coming off a May win over Walt Harris. Overeem is averaging 3.66 significant strikes per minute with an accuracy percentage of 63 percent. Overeem is averaging 1.4 takedowns with an accuracy percentage of 54 percent. Overeem is coming off a second round knockout at UFC on ESPN 8 where he landed 97 total strikes and produced a takedown. A complete dominating performance for Overeem and one that kind of redeems himself after a frustrating loss to Jairzinho Rozenstruik late last year. Overeem has a chance to win two fights in a single year for the first time since 2017. Overeem is what he is at 40 years old, and that’s a ferocious stand up striker with powerful combinations in his hands and nasty knees in the clinch. With a deep kickboxing background, Overeem has some of the best leg kicks to the body and usage of his knees in the sport, and they’re capable of producing a knockout with one clean shot. Overeem is also a well polished grappler and has eight career victories via the guillotine choke. The downside will always be Overeem’s chin, as 14 of his 18 career losses have come by knockout. Still, Overeem could easily be riding a four-fight winning streak, so he’s proving age is nothing but a number. This will be Overeem’s sixth career fight in Las Vegas.

Augusto Sakai enters this fight with a 15-1-1 record and has won 73 percent of his fights by knockout. Sakai has won each of his last six fights and is coming off a May win over Blagoy Ivanov. Sakai is averaging 5.45 significant strikes per minute with an accuracy percentage of 46 percent. Sakai is averaging 0.19 takedowns with an accuracy percentage of 50 percent. Sakai is coming off a split decision win at UFC on ESPN 9 where he landed 89 total strikes and 48 percent of his significant strikes. Sakai is now 4-0 under the UFC banner and has a chance to really put himself in a different light with a victory here. Sakai is a 29-year-old Brazilian who comes from a boxing background and has seen all 17 of his fights either end in knockout or decision. Sakai has clear power in his hands, and he’s effective in both the clinch and with his ground and pound. Sakai will throw haymakers when he gets his opponent against the cage and he’s not afraid to mix in some legs or knees. The problem with Sakai is he can be a bit sloppy with his attack and his hand speed isn’t great. We also need to see Sakai tap into his ground game, and he defended two of three takedown attempts in his last bout. This will be Sakai’s third career fight in Las Vegas.

I strongly considered Sakai and the plus money in this fight, but I just couldn’t pull the trigger. Overeem is the bigger fighter with the longer reach and that’s going to play a factor in this smaller cage. Overeem also appears to be on a mission to make a possible case for one last title shot. And while you always have to worry about Overeem getting caught with something, Sakai and his lack of hand speed kind of removes those worries in this bout. Sakai has also been on the right side of some questionable decisions, so this is a good bout to kind of get a better idea of just how good he is.

I lean toward Overeem in this bout.