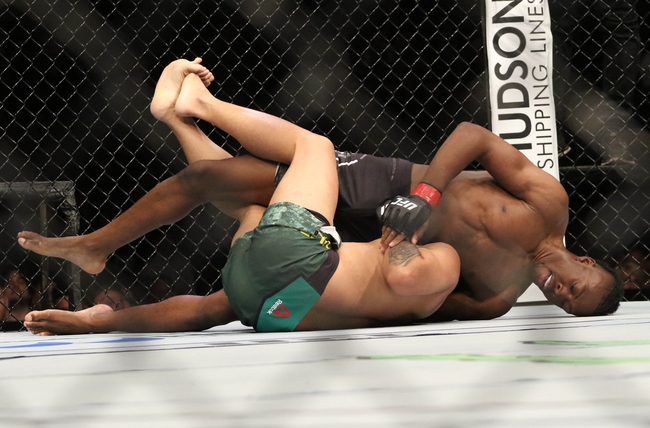 Thiago Moises enters this fight with a 13-4 record and has won 38 percent of his fights by submission. Moises has won seven of his last 10 fights and is coming off a May win over Michael Johnson. Moises is averaging 2.68 significant strikes per minute with an accuracy percentage of 43 percent. Moises is averaging 1.10 takedowns with an accuracy percentage of 28 percent. Moises is coming off a second round submission victory at UFC Fight Night 171, a fight he was losing up to that point. Moises is now 2-2 under the UFC banner and looks for back-to-back wins for the first time in two years. Moises is a tricky southpaw who isn’t afraid to let his hands go on his feet and will throw a bunch of combinations and has three career knockouts. Moises is a black belt in BJJ and has six career submission victories, and three of those wins have come via armbar. Moises fights well off his back and can go from being in a rough spot to end in a position to finish a fight in seconds. Moises has never been finished in his career with all four of his losses coming in decisions. This will be Moises’ second career fight in Las Vegas.

Jalin Turner enters this fight with a 9-5 record and has won 89 percent of his fights by knockout. Turner has won five of his last seven fights and is coming off a February win over Joshua Culibao. Turner is averaging 5.95 significant strikes per minute with an accuracy percentage of 48 percent. Turner is averaging 0.46 takedowns with an accuracy percentage of 50 percent. Turner is coming off a second round knockout victory at UFC Fight Night 168 where he landed 90 total strikes and 60 percent of his significant strikes. Turner is now 2-2 under the UFC banner and looks for back-to-back wins for the first time in two years. Turner is light on his feet, comes from a boxing background and has produced finishes in all nine of his victories. Turner is most known for his standup and punching power, but he also brings the patience, hand speed and footwork as well. Turner is a natural standup striker and if he can just put everything else together, he has a chance to do some serious damage on this level, especially with him only being 25 years old. This will be Turner’s third career fight in Las Vegas.

Moises probably should be the favorite given his BJJ background, experience and the fact he can hold his own standing up with him being a tricky southpaw. However, Turner is a young fighter I’m quite high on and see him eventually pushing the rest of this division. Turner has the build, the athleticism and the natural striking ability to start stringing wins together and turning heads. While he hasn’t proven much on this level yet, Turner has all the tools to be a force and shouldn’t be overlooked in the underdog role.

Give me Turner for the victory.