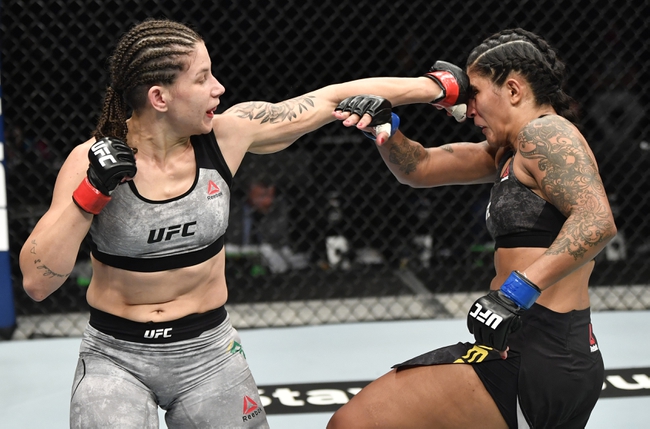 Sijara Eubanks enters this fight with a 5-4 record and has won 60 percent of her fights by decision. Eubanks has split her last eight fights and is coming off a May win over Sarah Moras. Eubanks is averaging 4.95 significant strikes per minute with an accuracy percentage of 41 percent. Eubanks is averaging two takedowns with an accuracy percentage of 50 percent. Eubanks is coming off  decision victory at UFC Fight Night 171 where she landed 104 total strikes and produced a pair of takedowns. Eubanks is now 3-2 under the UFC banner and looks for back-to-back wins for the first time in two years. Eubanks is a black belt in BJJ and is highly decorated in the field where she has won several medals in the World Jiu-Jitsu Championship. Eubanks has had great takedown success at the UFC level and has been a fairly decent striker on her feet with above-average defense. Some would consider Eubanks a bit of a points fighter, as seven of her nine fights have ended in decisions and she’s rarely in a position to finish the bout. Eubanks has good cardio and is in control of most of her fights in terms of pace. This will be Eubanks’ first career fight in Las Vegas.

Karol Rosa enters this fight with a 13-3 record and has won 54 percent of her fights by decision. Rosa has won each of her last four fights and is coming off a July win over Vanessa Melo. Rosa is averaging 9.70 significant strikes per minute with an accuracy percentage of 50 percent. Rosa is averaging one takedown with an accuracy percentage of 50 percent. Rosa is coming off a dominant decision win at UFC 251 where she landed 177 total strikes and produced two takedowns. Rosa is now 2-0 under the UFC banner and hasn’t lost a fight overall in two years. Rosa has shown to be an exciting fighter through two UFC bouts, as she’s been busy with her striking, aggressive and looks for the finish if she can get it. Rosa lets her hands go and has four knockouts on her resume. Rosa also has impressive cardio that’s helped her win seven of her eight career decisions. Rosa has never been knocked out despite three career losses.

Eubanks probably has the edge on the ground or in the clinch in this fight given her experience in BJJ. However, Rosa is the more aggressive and polished striker of the two, and she has a much higher finish ability. In a fight that’s close on paper and oddsmakers are a bit hesitant to make either a big favorite, I want the fighter who is the aggressor and can end things on their terms. That’s Rosa in this bout.

Give me Rosa and the cheap price.